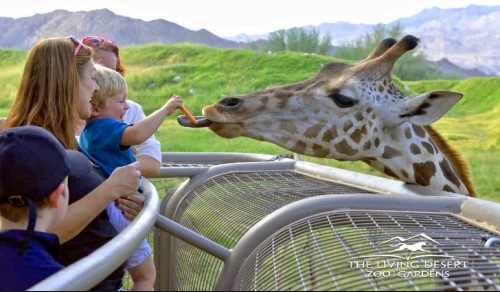 “This is a historic birth for us,” Director of Animal Care at The Living Desert RoxAnna Breitigan said. “Due to their very elusive nature and excellent desert camouflage, very little is known about sand cats, including their populations in the wild. We are proud to be participating in species conservation efforts that support these special felines.”

Mother Nadya welcomed the exotic-looking kittens — native to Northern African and parts of Asia — on March 23 at the Desert Carnivore Conservation Center, opened in March 2016, Erin Scott from The Living Desert Zoo said.

“I’m thrilled with how the kittens are developing,” Head Veterinarian Dr. Andrea Goodnight said. “They are becoming more adventurous each day and will soon begin exploring the areas outside their den box.”

A well-baby exam was administered on April 23, confirming that the kittens are developing normally at about 10-12 ounces each, Scott said. Although the Sand Cat family will remain behind-the-scenes at the Desert Carnivore Conservation Center, a webcam monitors their development in their den box.

The center was erected in order to expand conservation efforts for desert carnivores with a  specific focus on small desert cats and foxes, Scott said. Intentionally out of the purview of the public, the center allows animals an “undisturbed and quiet area for breeding, which comes at the recommendation of the Species Survival Plans.”

Sand Cats are usually solitary animals with thick fur to insulate them from the scorching heat of the daytime desert, as well as the cold blasts at night. Average litter size for the sandy felines is four.