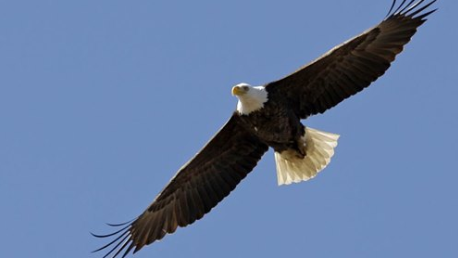 At least seven bald eagles have been killed in the past nine weeks on Maryland’s Eastern Shore after the rare birds were exposed to a powerful pesticide that’s been illegal for a decade, officials said Friday.

Six of them died in Kent County from ingesting carbofuran, which had once been sold under the trade name Furadan, according to a statement by the U.S. Fish and Wildlife Service and Maryland Natural Resources.

Then on April 3, authorities found three bald eagles that were sickened in Talbot Country after feeding on the carcass of a red fox that officials suspect was killed by carbofuran. One of those eagles has since died.

Carbofuran was once a popular farm pesticide used to target foxes and raccoons. It’s been banned from all use since 2009, because it was so powerful that it ended up killing animals not targeted by its use, officials said.

Still, it can be easily purchased online and farmers are believed to have stockpiles of the banned substance, even a decade later, authorities said.

Using the illegal pesticide could result in fines of up to $25,000 under state law, according to the Maryland Department of Natural Resources.

“It is hard to believe that not one person has information of persons placing a toxic poison that has killed no fewer than twenty eagles in these areas,” U.S. Fish and Wildlife Agent Jay Pilgrim said in a statement. “The only way this stops is if the local communities come forward with information.”

While bald eagles are no longer listed under the Endangered Species Act, they are still rare and protected by federal law.