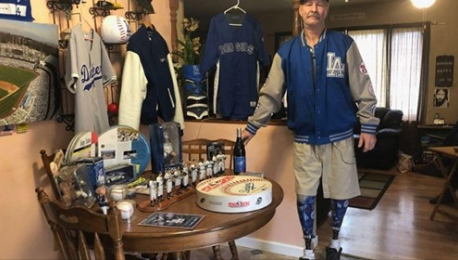 A double amputee and die-hard Los Angeles Dodgers fan will step on the mound at Dodger Stadium to throw the ceremonial first pitch Monday night against the Atlanta Braves.

Mark Andersen’s blue prosthetic legs feature different Dodgers logos used since the 1930s. His love for the baseball team draws back to traditional annual trips he took with his dad to Dodger Stadium.

The Santa Maria resident lost his legs during a boating accident at Lake Nacimiento in 2000. When the time to get new prosthetic legs came, Anderson undoubtedly wanted a Dodgers design.

“I said, ‘Hey, throw the Dodgers on there and they look good,” Andersen told KSBY.

Andersen’s persistence to move forward inspired one of the employees at the prosthetic office, who contacted the Dodgers to tell the team about his story.

“I realized he likes the Dodgers and I decided after that, I wonder if there’s a way to let the Dodgers know about them and that’s where it started,” said Keith Severson, an employee at the prosthetic office.

When Andersen went to a doctor’s appointment for his fitting, the Dodgers fan was shocked with the news about throwing the first pitch.

“Absolutely scared to death. All my old ballplayer buddies told me I better not bounce the ball,” he said.

Andersen is throwing the first pitch against the Atlanta Braves as part of the team’s Blue Wishes program, which grants wishes for fans, particularly those with life-threatening illnesses.