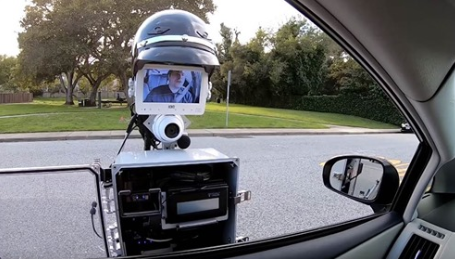 A California man has built a robot that he hopes will take some of the danger out of traffic stops — those anxiety-provoking and potentially deadly encounters between police officers and motorists that play out on American roads more than 50,000 times a day.

The GoBetween robot is attached to a rod that extends forward from an officer’s car to a motorist’s window, enabling the officer and the motorist to communicate with one another without leaving their vehicles. The bot can even issue a ticket.

“I got tired of hearing news reports of motorists and cops getting shot or run over in traffic stops, usually in what seemed like preventable situations,” Reuben Brewer, a mechanical engineer at the nonprofit research organization SRI International in Menlo Park, California, and the robot’s inventor, said in an email. “I’d be absolutely thrilled for this robot to save even a single life … No one should die in a traffic stop.”

Of course, that’s not the case today.

Nationwide statistics on traffic stop outcomes are hard to find, but experts say they lead to many injuries and deaths each year — particularly among black motorists, who are more likely than their white counterparts to experience violence from police. Police officers, meanwhile, run the risk of being assaulted by motorists or struck by passing cars.

GoBetween has all the tools it needs to conduct traffic stops, including a tablet screen, webcam, signature pad and a small printer that spits out the citations.

A video posted by SRI International shows how the proof-of-concept prototype robot works: Once the officer’s vehicle is parked behind the motorist’s car, GoBetween rolls up to the driver’s side window of the motorist, where it becomes the officer’s eyes, ears and mouth. A spike strip automatically placed in front of the car’s rear wheels keeps the motorist from driving away until the traffic stop is completed.

“The robot is purely defensive, so it can’t hurt the motorist,” Brewer said of the unarmed bot.

What do experts make of the traffic stop robot? Amy Shoemaker, a data scientist involved with the Stanford Open Policing Project, offered a mixed assessment.

“If there is a role for this tool, it’s to help prevent tragedies like Philando Castile’s death,” she said, Castile, 32, was an African-American man who was fatally shot by police in 2016 after being pulled over in St. Paul, Minnesota. But given the complexities of race and policing, she said, “it doesn’t seem like a panacea.”

Shoemaker’s team at Stanford found that black drivers were pulled over and searched more often than white drivers, even though they were less likely to be found with illegal drugs or weapons.

“Addressing the potential for violence in traffic stops is important,” Khalilah Brown-Dean, a political science professor at Quinnipiac University in Hamden, Connecticut, said in an email. “But until we address and eliminate the bias that shapes which individuals, groups, and neighborhoods are more likely to be stopped and surveilled, these tech innovations will remain a temporary fix to a much larger problem.”

Brewer, who built the first version of GoBetween in his garage and bolted it onto his own car for testing, agrees. “It’s only part of the solution,” he said of the robot. “But I hope one day it could save lives.”

He said he’s now working on a second prototype that can access a car’s passenger side window, adding that he hoped to secure funding to further develop the bot and conduct field tests with police.