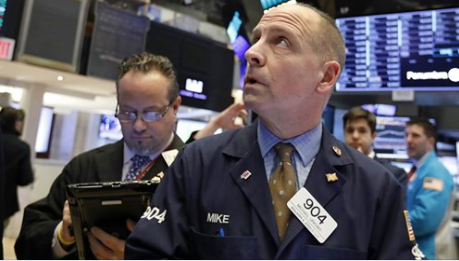 Wall Street plunged Monday morning, with the Dow Jones Industrial Average falling by almost 600 points in response to a ratcheting up of trade tensions after China said it would raise tariffs on $60 billion worth of U.S. goods, starting June 1.

Global markets have shown intense volatility over the past few weeks, with all three major indices in the U.S. seeing an extended sell-off as investors parsed the likelihood of a resolution to months of trade negotiations between the world’s two largest economies. Last week was the worst for the S&P 500 so far this year, with the index falling by more than 3.5 percent. The Dow Jones saw its biggest decline since March.

The retaliation from the Chinese finance ministry comes after President Donald Trump followed through on his threat to raise tariffs on $200 billion of Chinese imports last week. As of 12:01 a.m. last Friday, around 5,700 categories of Chinese-made goods bound for the U.S. were subject to a 25 percent tariff, up from 10 percent.

After the two sides failed to reach a deal during high-level trade talks in Washington last week, Trump challenged Beijing, tweeting this weekend that “I say openly to President Xi & all of my many friends in China that China will be hurt very badly if you don’t make a deal because companies will be forced to leave China for other countries. Too expensive to buy in China. You had a great deal, almost completed, & you backed out!”

He also warned the Chinese that “the deal will become far worse for them if it has to be negotiated in my second term. Would be wise for them to act now, but love collecting BIG TARIFFS!”

….The only problem is that they know I am going to win (best economy & employment numbers in U.S. history, & much more), and the deal will become far worse for them if it has to be negotiated in my second term. Would be wise for them to act now, but love collecting BIG TARIFFS!

China has already raised duties on $110 billion of American imports in retaliation for earlier tariff hikes by the Trump administration.

Due to the lopsided trade balance — China imports only $130 billion in American goods, compared to the $500 billion in Chinese goods that the U.S. imports — regulators have targeted operations of American companies in Chinaby slowing customs clearance for their goods and stepping up regulatory scrutiny that can hamper operations.

The decline in trade relations has left businesses, investors, and policymakers across the world concerned about the negative impacts on an already slowing global economy.