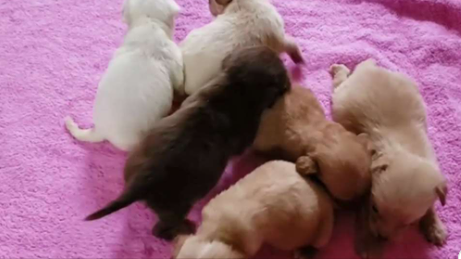 Animal-Control Official: Trashed Puppies Getting Chunkier by the Day

Six puppies rescued from a Coachella trash bin, where they were allegedly dumped by a woman found with dozens more dogs at her home, are gaining weight and getting healthier thanks to care from a foster volunteer, an animal-services official said Tuesday.

A total of seven days-old puppies were found April 18 in a trash bin outside a Napa Auto Parts store at 49251 Grapefruit Blvd., police said. A passerby rummaging through the dumpster found the animals, who were stuffed in an enclosed bag and dropped in the sweltering bin.

One of the animals, described as the runt of the litter, died days later, but the other six survived and are being cared for by a foster volunteer, Riverside County Department of Animal Services spokesman John Welsh said.

Now at three weeks old, the surviving pups are “getting chunkier” thanks to bottle-feedings, Welsh said. The puppies have even started to crawl around with their newfound strength, and they are slowly being transitioned to a steady diet of canned food.

Deborah Sue Culwell, 54, is accused of dumping the animals in the trash bin. She was arrested on suspicion of animal cruelty four days after the puppies were found, but was freed on $10,000 bail.

Security surveillance video from the auto parts store allegedly shows Culwell exiting her Jeep with a plastic bag and depositing the bag in the bin, authorities said.

Officials searched Culwell’s home and found 38 other dogs at the property. All of them were confiscated and Culwell has surrendered ownership of the animals.

“Meanwhile, all 38 of the confiscated dogs connected to the puppy- dumping case have been saved,” Welsh said. “As many of you will recall, we seized 38 dogs at the property where the puppy-dumping suspect lived. Thanks to our rescue partner organizations, we are pleased to share that every single one of those dogs has left our shelter in Jurupa Valley.”

Most of the rescued dogs appeared to be terrier mixes ranging from 1 to 5 years old.