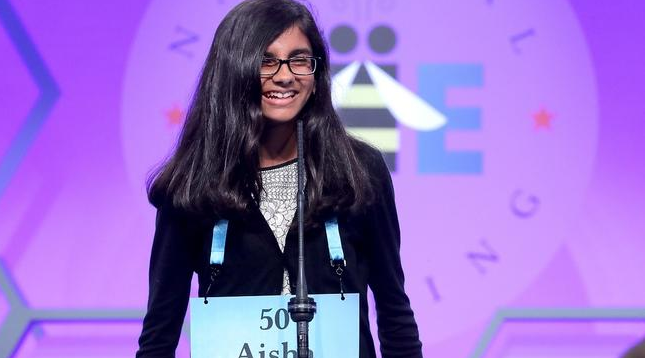 Corona Student Advances to Ninth Round of National Spelling Bee

An eighth-grader from Corona was among 16 spellers advancing to the closing portion of the 92nd Scripps National Spelling Bee, correctly spelling five words Thursday.

Aisha Randhawa correctly spelled epicede, a funeral song or ode, in the fourth round; kahili, a long pole decorated at one end with a cluster of feather plumes and used as a ceremonial emblem in Hawaii, in the fifth; thelytokous, an adjective meaning producing only females, in the sixth; chylocaulous, an adjective meaning having fleshy or succulent stems, used to describe cacti and similar plants, in the seventh; and lesche, a social gathering place of classical antiquity in the eighth.

The bee is set to resume at 5:30 p.m. PDT at the Gaylord National Resort and Convention Center in National Harbor, Maryland, near Washington, D.C.

To reach the finals, contestants had to correctly spell two words on stage and score high enough on a spelling and vocabulary test.

Aisha correctly spelled both of the words she was given Tuesday — agua fresca, a beverage consisting of water and sugar with fruits, grains or seeds added for flavoring, in the second round, and redoubtable, an adjective meaning causing fear or alarm, in the third round.

Aisha and her 562 fellow competitors took a multiple-choice test with 12 spelling words and 14 vocabulary questions on Monday. The test is considered the bee’s first round.

The finalists are determined by the test scores of the spellers who correctly spelled their third-round words. The finals are limited to a maximum of 50 spellers. Spellers’ scores are plotted on a chart beginning at 36. Spellers at each consecutive scoring level are added until no more than 50 spellers are attained.

The lowest score to advance to the finals was 30.

Aisha is among seven spellers in the national bee making their fourth or fifth appearances. Her seventh-place tie last year is the fourth-highest past finish among spellers in the original field.

Aisha was eliminated in the 11th round of last year’s bee when she misspelled perduellion, a noun meaning treason, omitting the second L. She tied for 22nd place in the 2016 bee and tied for 35th in the 2017 bee.

This is Aisha’s final bee because it is limited to students in eighth grade or below. Contestants for the 92nd edition of the national bee ranged in age from 7 to 15.

The 13-year-old qualified for the national bee by winning the Riverside County Spelling Bee for a record fourth consecutive time.

Aisha said she thoroughly enjoys “learning of all kinds” and loves performing in the Auburndale Intermediate School jazz band, for which she plays the piano and alto saxophone. She said she has fun with her siblings and friends playing board games and exploring the outdoors.

The original field consisted of spellers from all 50 states and the District of Columbia, along with American Samoa, Guam, Puerto Rico, the U.S. Virgin Islands and Department of Defense schools in Europe. Seven foreign nations were also represented — the Bahamas, Canada, Germany, Ghana, Jamaica, Japan and South Korea.

The winner will receive a record $50,000 cash prize, $10,000 more than last year, from Scripps, which owns television stations and newspapers.

The winner also receives $2,500 and a complete reference library from the dictionary publisher Merriam-Webster; reference works and a three-year online membership from Encyclopedia Britannica, plus trips to Hollywood to appear on the ABC late-night program “Jimmy Kimmel Live” and New York City to appear on the syndicated morning talk show “Live with Kelly and Ryan.”

The bee is intended “to inspire children to improve their spelling, increase their vocabularies and develop correct English usage that will help them all their lives,” according to Paige Kimble, the bee’s executive director and 1981 champion.

A speller from Riverside County has never won the bee.