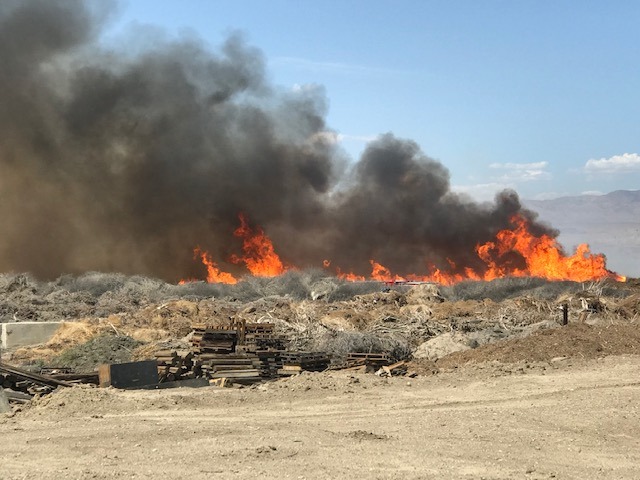 Firefighters knocked down a brush fire in Blythe but were still working to contain one in Thermal Friday morning.

The Thermal blaze had burned 51 acres and was 70% contained as of 11 a.m., according to Riverside County Fire Department spokesman Rob Roseen. It had been reported at 70 acres Thursday night, but firefighters were able to more accurately map the blaze on Friday.

Flames were first reported just after 9 p.m. Wednesday in the 87000 block of Avenue 66, where arriving firefighters initially found a large mulch pile burning at about five acres. Crews fought the brusher throughout the night.

As of 7 a.m. Thursday, the blaze had scorched about 10 acres and was 60% contained, but by 3 p.m., the fire had spread to another 30 acres outside the initial containment area and additional resources were dispatched, according to the fire department.

Avenue 66 was closed between Fillmore Street and Tyler Street while crews worked to keep the brusher at bay. Tyler Street was also closed from Avenue 66 to Avenue 62.

A total of 60 firefighters were assigned to the blaze as of Friday morning, the Fire Department reported.

No injuries were reported and no structures were threatened.

The brush fire that erupted north of Blythe, meanwhile, was 100% contained late Thursday night after burning 45 acres, according to Roseen.

That blaze was reported just before 12:41 p.m. Thursday in a hayfield near Highway 95 and Second Street near Blythe, according to the Riverside County Fire Department.

A total of 40 firefighters battled the blaze, which had been burning in heavy brush and driven by strong winds, the fire department said.

Cal Fire crews were assisted by the Blythe Fire Department in working to contain the Blythe blaze.