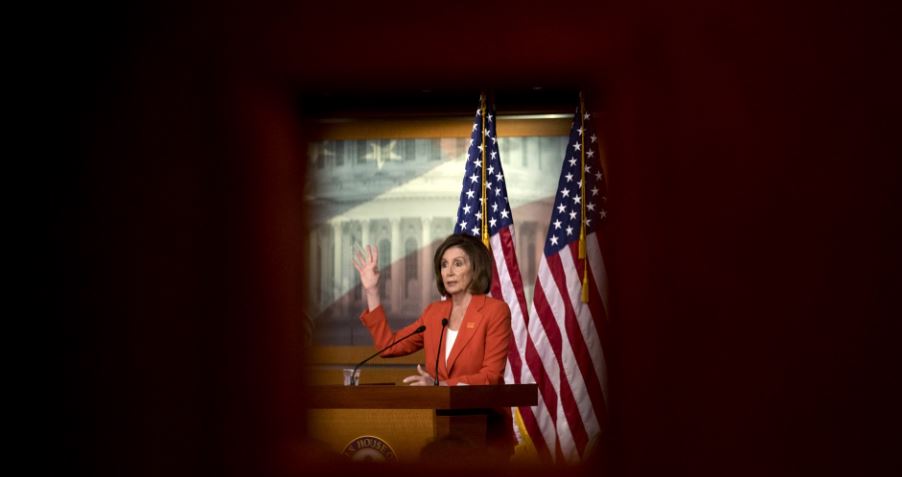 Pelosi told Democrats she would rather see Trump ‘in prison,’ not impeached

Pelosi made the comment in a Tuesday meeting with several House committee leaders, including Judiciary Committee chairman Jerrold Nadler, D-N.Y., who has pressed Pelosi to allow his panel to begin an impeachment inquiry against the president, Politico first reported Wednesday, citing multiple unnamed sources.

Politico did not characterize the full context or tone of Pelosi’s comment, but a congressional aide who was in the room told NBC News that her remark was “consistent with her position that Trump needs to be removed electorally in 2020.”

The Washington Post also and two sources told the paper that the meeting was not particularly contentious and described Pelosi’s comments as offhand.

Asked about the Politico story, a spokeswoman for Pelosi told NBC News that she and Nadler “had a productive meeting about the state of play with the Mueller report.”

“They agreed to keep all options on the table and continue to move forward with an aggressive hearing and legislative strategy, as early as next week, to address the president’s corruption and abuses of power uncovered in the report,” the spokeswoman, Ashley Etienne, said in a statement Wednesday.

Nadler, Intelligence Chair Adam Schiff of California, Oversight Chair Elijah Cummings of Maryland, Ways and Means Chair Richard Neal of Massachusetts and Foreign Affairs Chair Eliot Engel of New York were seen coming out of Pelosi’s office Tuesday afternoon, but most declined to comment on what had been discussed.

“We just had a free discussion about what paths we might use to move forward, and there was no conclusion,” Engel told NBC News afterward.

“I know that we are determined to get the information we need, and if we can’t get it one way, we will get it another way.”

Pelosi has said impeachment is not “off the table,” but has urged the committee chairs to aggressively push their investigations into Trump’s businesses, campaign and administration in the hope that more evidence of misconduct will make it difficult for the Republican-controlled Senate to quickly acquit the president if the House brings impeachment charges.

In the Tuesday meeting, Pelosi said she would like to see Trump defeated in the 2020 election and then prosecuted for his alleged crimes, the sources told Politico.

More and more Democrats, however, are urging her to begin an impeachment inquiry. An NBC News tally this week counted 60 House Democrats who are in favor of starting impeachment proceedings immediately.

The pressure intensified after Robert Mueller made a public statement outlining the findings in his 448-page special counsel report on Russian interference in the 2016 presidential election and Trump. Mueller found there was not sufficient evidence to show that the Trump campaign had knowingly conspired with Russian agents and came to no conclusion on whether the president had attempted to obstruct justice while outlining several instances of Trump trying to disrupt the almost two-year investigation.