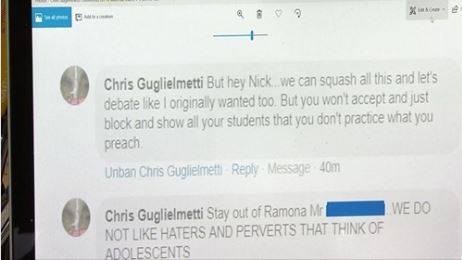 A heated Facebook argument rose to the level of a legal battle. One of the men involved has been considered such a threat that he’s been forced to turn over his firearms.

Nick, a director of an English as a Second Language school in San Diego, said the argument started with Chris Guglielmetti back in March on Facebook after Nick insulted U.S. Rep. Duncan Hunter (R-California) regarding the congressman’s indictment.

Guglielmetti is from Ramona, Hunter’s district, and didn’t take too kindly to Nick’s comment. Nick said after a while, he decided to back off and stopped engaging.

But Guglielmetti wouldn’t stop. He looked up Nick’s ESL school and started calling and leaving voicemails.

“This is Chris Guglielmetti…you picked a fight with the wrong person, dude,” Guglielmetti said in one of the voicemails.

Nick filed a restraining order, but the threats continued until Guglielmetti found out Nick had planned a class hike in Ramona.

“Stay out of Ramona m—- f—-. This is MAGA country, if you bring those f—illegals up here, we’re going to have a problem,” said Guglielmetti in a voicemail.

Nick had to call the police, and the San Diego County Sheriff’s Department met his students at their hike the next day.

Nick says the experience changed the way he operates online.

“I have thought twice about getting into some conversations about the hot button issues because they upset some people more than others and the actions that some of these people are willing to go to… I just don’t want to go through that again,” said Nick.

The San Diego City Attorney’s Office tells NBC 7 that Guglielmetti’s gun violence restraining order will be in place for a year.

NBC 7 will not mention Nick’s last name or the name of his business because he was threatened.

Hunter and his wife, Margaret, were indicted in 2017 on federal charges of illegally converting more than $250,000 in campaign contributions for personal living expenses. Both have pleaded not guilty and have their next court hearing scheduled for July 29. Trial is set for later this year.