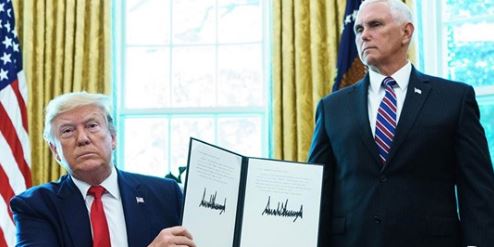 Fresh sanctions levied by the United States drew an intense reaction from Iran on Tuesday, with a senior official saying they spell the “permanent closure” of diplomacy between the two countries.

Iran said it would take new steps to reduce its commitments under its nuclear deal with world powers on July 7, according to Fars, Iran’s semi-official news agency.

Ali Shamkhani, the head of Iran’s national security council, said European signatories to the nuclear deal had not done enough to save it, during an interview with Fars. The landmark 2015 deal requires Iran to curb its nuclear program in exchange for the lifting of sanctions.

The U.S. withdrew from the deal last year and Trump announced additional sanctions on Monday against Iran’s supreme leader, Ayatollah Ali Khamenei, and his associates. The measures deny Khamenei and senior Iranian military figures access to financial resources and block their access to any assets they have under U.S. jurisdiction.

Trump fired back later Tuesday, warning that any attack by Iran “will be met with great and overwhelming force.”

….The wonderful Iranian people are suffering, and for no reason at all. Their leadership spends all of its money on Terror, and little on anything else. The U.S. has not forgotten Iran’s use of IED’s & EFP’s (bombs), which killed 2000 Americans, and wounded many more…

The U.S. measures were in a part a response to Iran shooting down a U.S. surveillance drone that it said entered its airspace. The U.S. says it was flying in international airspace.

Rouhani said in a televised speech on Tuesday that Trump’s latest sanctions were “hilarious” and a “stupid and ugly act.”

Rouhani said that incident “raised the nation’s confidence” and showed “we are not scared of the U.S. but we have strategic patience.”

U.S. officials also said they plan sanctions against Iranian Foreign Minister Mohammad Javad Zarif, a man who worked closely with then-Secretary of State John Kerry during negotiations for the nuclear deal that Trump withdrew from.

By its conclusion, Kerry and Zarif were on first name terms, with the secretary of stating hailing his opposite number as a “patriot” who enjoyed his “mutual respect.” Trump’s first secretary of state, Rex Tillerson, met with Zarif on the sidelines of the United Nations General Assembly in September 2017.

Trump has said he had been on the verge or ordering airstrikes on Iran following the downing of the drone but called off the operation with minutes to spare. Iran’s defense minister, Brig. Gen. Amir Hatami, said the incident showed that “the enemies of Iran are incapable of taking any military action,” the semi-official Tasnim news agency reported Tuesday.

With tensions high, the U.S. officials such as John Bolton, the national security adviser, say they want to enter into negotiations with Iran. “All that Iran needs to do is walk through that open door,” Bolton told a high-profile security summit in Jerusalem.

But the silence of the Islamic Republic has been “deafening,” according to the U.S. envoy at the United Nations, Jonathan Cohen.

Iran’s foreign ministry spokesman, Abbas Mousavi, responded that the sanctions, adding to other measures already squeezing his country’s economy, made negotiations impossible under the current circumstances.

The sanctions mean “the permanent closure of the path of diplomacy with the desperate government of the United States,” Mousavi said in a tweet.

Mousavi’s statement echoed that of Iran’s U.N. ambassador, Majid Takht Ravanchi, who warned Monday that the situation in the Persian Gulf is “very dangerous” and said any talks with the U.S. are impossible in the face of escalating sanctions and intimidation.

For its part, Russia says it is concerned about the rising tensions. On Tuesday, its Foreign Minister Sergey Lavrov called the new U.S. sanctions a “very bad scenario,” according to the state-run Tass news agency, and he likened Washington’s actions to its justification in the run-up to the Iraq War in 2003.

“We all remember how it ended,” Lavrov said.

Tensions have been rising against the backdrop of the unraveling of the Iran nuclear deal, which was agreed by world powers in 2015 but abandoned by Washington last year.

Iran was abiding by the deal, which eased sanctions in exchange for curbing its nuclear program. Its other signatories have stuck with it, but Trump withdrew saying its terms were too soft.

In protest at the U.S. walking away, Iran said that later this week it will breach the uranium limit it agreed with world powers four years ago. Even though the U.S. has withdrawn from that agreement, it says it still expects Iran to abide by its terms, and Bolton said Tuesday that “all options remain on the table” if Iran reneges.

Trump said the new sanctions are also in response for attacks on two oil tankers this month near the Strait of Hormuz. Washington blames Iran, which in turn has denied any involvement.

Citing those episodes and intelligence about other Iranian threats, the U.S. has sent an aircraft carrier to the Persian Gulf region and deployed additional troops alongside the tens of thousands already there.

The sanctions were announced as U.S. Secretary of State Mike Pompeo was holding talks in the Middle East with officials in the United Arab Emirates and Saudi Arabia.