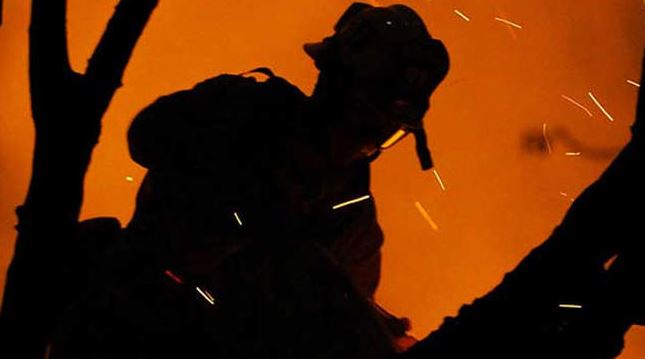 A wildfire that broke out Tuesday in a south Riverside preserve blackened 273 acres and damaged a home before being fully contained.

The non-injury blaze was reported about 12:30 p.m. on the east side of Sycamore Canyon Wilderness Park, facing Speyside Road, according to the Riverside Fire Department.

Crews from Riverside, Corona, Riverside County and other agencies deployed on the brusher, working to contain it with the aid of Cal Fire water- dropping helicopters.

The fire’s forward rate of spread was stopped at 2:45 p.m., and the blaze was declared 100% contained just before 4 p.m.

Riverside Fire Department Division Chief Dave Bakas told City News Service investigators had been summoned to look at where the flames originated to identify a potential source. Bakas did not know whether arson might have been the cause.

One property on Haddington Drive sustained minor damage when embers flew onto the rear deck, burning the wood, according to reports from the scene. Firefighters doused the flames and removed the charred pieces.

Flames also reached shrubs and a palm tree adjacent to another property, but the home itself was not damaged. At one point, Riverside motorcycle police officers were assisting fire crews with hosing down shrubbery adjacent to homes on Lochmoor Drive.

A voluntary evacuation warning was issued for residents in the area of Lochmoor Drive and Kirkmichael Circle, but the advisory was canceled an hour later.

Police closed Central Avenue, between Canyon Crest and Lochmoor drives, as a safety precaution. The heavily used corridor was expected to re- open before nightfall.

Sycamore Canyon Wilderness Park is about 1,400 acres in size and features a riparian channel, mountain biking and hiking trails through a series of rocky hills. The last significant fire occurred there on July 4, 2013, burning 130 acres in the middle of the park.