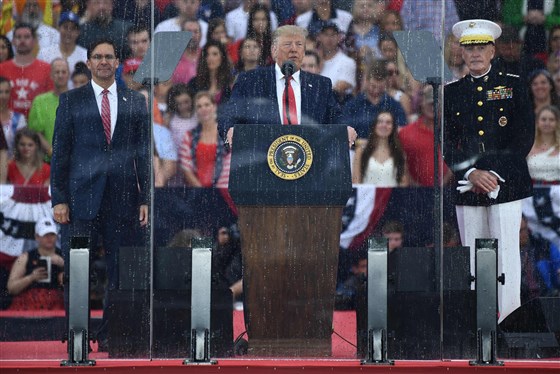 President Donald Trump took the stage Thursday for his “Salute to America” Fourth of July celebration in Washington — a military-inspired event that brought tanks to the Lincoln Memorial.

“Today, we come together as one nation with this very special salute to America,” Trump said after taking the stage to chants of “USA.” “We celebrate our history, our people, and the heroes who proudly defend our flag — the brave men and women of the United States military.”

As the president walked out, holding hands with first lady Melania Trump, Air Force One flew over the large crowd assembled on the National Mall.

Throughout his remarks, Trump praised existing military branches and promised that “very soon, the space force” would join them.

“Someday soon, we will plant the American flag on Mars,” he said. 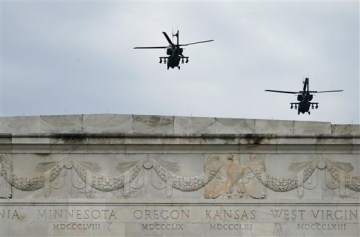 After urging young Americans to join the armed forces, Trump invited Joseph Dunford, chairman of the Joint Chiefs of Staff, and acting Defense Secretary Mark Esper up to join him on stage. They stood on either side of Trump as he recited the heroics of members of the Coast Guard on D-Day and introduced the air assets the crowd would soon see — expected to be a MH-60 Jayhawk helicopter, a MH-65 Dophin helicopter and a C-144 turboprop plane, according to two U.S. Defense Department officials familiar with the planning Tuesday.

The Air Force flyover was next, with two F-22 Raptor planes flanking a B-2 stealth bomber. As the roar of the planes faded, more cheers of “USA! USA!” broke out. The third flyover was courtesy of the Navy, the fourth, the Marine Corps.

Trump previewed one of those air assets as a VH-92 helicopter — soon to be the new Marine One, the presidential helicopter. The Marine Corps has said it is currently in the testing and evaluation phase in Maryland.

The Army provided the fifth flyover made up of four Apache helicopters.

“We all share the same home, the same heart, and we are all made by the same almighty God,” Trump concluded, before inviting the first lady, Vice President Mike Pence and other administration officials and guests to watch the Navy Blue Angels aerial acrobatics show on stage alongside him. 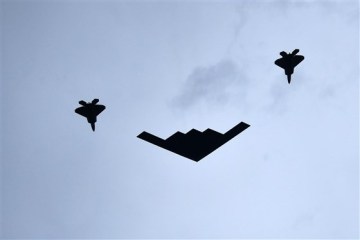 After the military band played “The Battle Hymn of the Republic,” the Blue Angels roared over the Washington Monument in formation.

The president’s speech came after a downpour soaked those who took the president’s advice and arrived early to the event and created some uncertainty over whether the military flyovers would be able to take place as planned.

More rain and possible thunderstorms are in the forecast for the rest of the evening Thursday, The National Weather Service issued a flash flood watch active until 8 p.m. for parts of the nation’s capital and the Maryland and Virginia suburbs, The Associated Press reported.

Critics of what Trump said would be the “show of a lifetime” raised concerns about the cost to taxpayers, the appearance of politicizing a traditionally non-partisan celebration and worries that the military is being used as a political prop.

Two Trump re-election campaign officials told NBC News Thursday that the “Salute to America” would not be documented for future campaign ads or video, calling it “entirely an official White House event.”