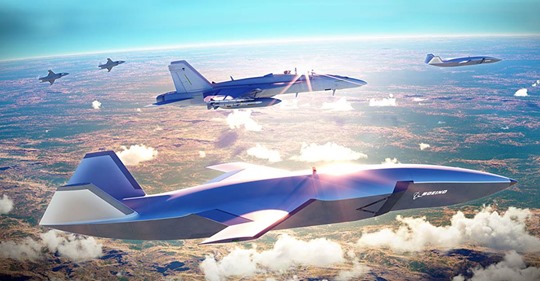 Military pilots may soon have a new kind of wingman to depend upon: not flesh-and-blood pilots but fast-flying, sensor-studded aerial drones that fly into combat to scout enemy targets and draw enemy fire that otherwise would be directed at human-piloted aircraft.

War planners see these robotic wingmen as a way to amplify air power while sparing pilots’ lives and preventing the loss of sophisticated fighter jets, which can cost more than $100 million apiece.

“These drone aircraft are a way to get at that in a more cost-effective manner, which I think is really a game-changer for the Air Force,” says Paul Scharre, director of the technology and national security program at the Center for a New American Security, a think tank in Washington, D.C.

Unlike slow-moving drones such as the Reaper and the Global Hawk, which are flown remotely by pilots on the ground, the new combat drones would be able to operate with minimal input from human pilots. To do that, they’d be equipped with artificial intelligence systems that give them the ability not only to fly but also to learn from and respond to the needs of the pilots they fly alongside.

“The term we use in the Air Force is quarterbacking,” says Will Roper, assistant secretary of the U.S. Air Force for acquisition, technology and logistics and one of the experts working to develop the AI wingmen. “So the pilot is calling a play and knows how the systems will respond, but doesn’t have to run the play for them.”

Earlier this year, the U.S. Air Force Research Laboratory took an important step in the development of the AI wingmen by announcing its Skyborg program focused on developing the AI necessary to control the drones. As part of the program, Air Force pilots are already flying simulated missions alongside the drones. Roper says drones like the XQ-58A Valkyrie, a 652-mph drone built by Sacramento-based Kratos Unmanned Aerial Systems with a projected manufacturing cost of $2 million apiece, could be AI-enabled and ready to fly within the next three years. “I wouldn’t be surprised if the AI becomes tailored to individual pilots,” Roper says. “They’re actually training their own AI that augments their strengths and weaknesses.”

The U.S. military isn’t alone in working to develop fighter drones. The Future Combat Air System is a $74-million, two-year deal between Germany and France aimed at building a next-generation fighter that would act as a flying command center for swarms of the fighter drones.

And the Royal Australian Air Force has teamed up with Boeing to develop an AI-controlled drone with “fighter-like performance” that could accompany human-piloted aircraft or fly solo, Shane Arnott, director of Boeing Australia, says.

The latter program plans for the first test flight to take place in 2020, with the goal of eventually selling the system worldwide.

Given the rise of drones and AI, some experts question whether it makes sense to continue sending human pilots into harm’s way. Why not have people on the ground or in an airborne command center give orders to swarms of combat drones — and let them carry out the mission on their own?

“If you just make the human go fly in combat and their wingman is a drone, it doesn’t change their risk profile at all — it only adds to their workload,” says Missy Cummings, director of the humans and autonomy laboratory at Duke University and a former fighter pilot in the U.S. Navy.

Scharre says the military still needs humans “forward in the fight” to guide combat drones. But he too sees a coming shift in the role of combat pilots — from flying a fighter jet and controlling its weapons systems to acting as a “battle manager” who decides what actions need to be taken by piloted and drone aircraft. That will likely include deciding when drones should use deadly force and selecting specific targets — decisions that the U.S. military is hesitant to hand over entirely to AI in part because research suggests AI is less skilled than humans at adapting to changing or uncertain situations.

“A country that does not have pilots trained as good as we do might see appeal in shifting more and more of their mission to autonomous systems,” Roper says. “Well, if they do that, I think we will have the advantage, because those autonomous systems acting alone will never be able to do what people teamed with machines are able to do.”