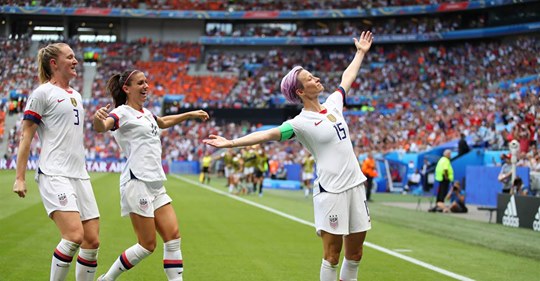 It came in the form of chants at the stadium. A rousing advertisement from a sponsor. And a stream of tweets from fans, athletes and politicians.

Minutes after the United States women’s national soccer team crushed the Netherlands 2-0 to win the 2019 Women’s World Cup, the celebration turned into a call to action: Pay the players more.

In the backdrop of the women’s spectacular run to the top Sunday — their second consecutive World Cup win and fourth overall — was a federal gender discrimination lawsuit filed by all 28 players of the team accusing the U.S. Soccer Federation of paying them less than the men’s team and denying them the same playing, training and travel accommodations, while also not promoting their matches as much as the men’s.

The lawsuit, filed in March on International Women’s Day, alleges that the female players were paid $1.725 million in bonuses after winning the Women’s World Cup in 2015, significantly less than the $5.375 million in bonuses that the federation paid U.S. male players in 2014 — a year when the men only made it to the 16th round of the World Cup. NBC News has reached out to the U.S. Soccer Federation for comment.

Support for the women’s demands exploded after their win, when thousands of fans at Stade de Lyon in France started chanting “Equal pay! Equal pay!” as FIFA president Gianni Infantino walked over to congratulate the team. The same calls reverberated throughout Twitter, with one of the team’s sponsors, Nike, releasing a powerful ad calling for equality, and fans ranging from tennis great Billie Jean King to Sen. Chuck Schumer, D-N.Y., tweeting their support for a pay raise for the women.

This team wins. Everyone wins.

Victory is when we all win. It's only crazy until you do it. #justdoit @USWNT pic.twitter.com/pBU7UE2IEs

Days before the final match, Infantino proposed doubling the winning money for women in the World Cup, which would still leave them with far less than what men earn. The U.S. Soccer Federation, for its part, has not commented on the lawsuit, but has said that any alleged pay disparity is “based on differences in the aggregate revenue generated by the different teams and/or any other factor other than sex.”

But many, including Jeffrey Kessler, the New York-based attorney for the female players, call that a specious argument.

“According to their own audited financial statements, the women’s team have generated more revenues than the men’s team over the last number of years,” Kessler told NBC News on Monday, citing a Wall Street Journal report from last month that found that from 2016 to 2018, women’s matches produced about $50.8 million in revenue compared with $49.9 million for the men.

The Journal pointed out that while the difference is attributed mostly to ticket sales, the U.S. Soccer Federation sells broadcast and sponsorship rights for the two teams together, making it hard to parse out the precise value of each individually. Regardless, Kessler slammed the federation for not paying the women more.

“I think the World Cup win just underscores that this is the greatest women’s professional soccer team in history,” he said. “And the fact that they are not being paid the same as the men’s team is scandalous and unlawful.”

Both parties in the lawsuit have agreed to try to mediate a settlement, and a judge is expected to set a schedule for the case later this summer, Kessler said, adding that he hopes to have a trial date sometime next year.

While many other professional sports do not pay female athletes the same as their male counterparts — tennis has made the most strides with pay equality, according to Kessler — the U.S. women’s soccer players stand out because of their ability to generate such strong viewership, which is not always the case in other sports.

The last women’s World Cup win, in 2015, was the highest rated television event for soccer in the U.S. for male or female players, with 23 million viewers tuning in. Ratings for Sunday’s World Cup final are expected to be released later Monday.

The team has plenty of support for its fight for equal pay, including from the Democratic Women’s Caucus, which wrote an open letter to U.S. Soccer Federation President Carlos Cordeiro.

They have a strong track record of success, having also won gold in four of the six Olympic Games in which women’s soccer has been played. The U.S. men’s national team, on the other hand, last placed in a World Cup back in the very first one that was played in 1930, when they took third place. They have not come close since, failing to even qualify for the 2018 World Cup in Russia.

Before Sunday’s game, American star Megan Rapinoe, who has received praise for being an openly gay athlete and who publicly announced she would not accept an invitation to the White House if offered one from President Donald Trump — alluded to the difficulties of being a female professional soccer player.

“So much of what we have to shoulder all of the time is heavy,” Rapinoe, who won the Golden Boot as the tournament’s top scorer, said. “It’s no secret that we’re sort of the leaders in the women’s game in a lot of different issues — equality, pay quality, gender issues — and at large, our team has been very open and willing to sort of get in any kind of equality fight.”