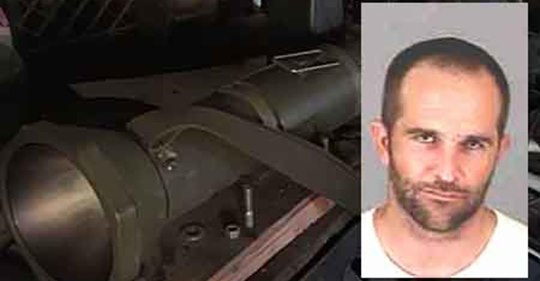 A man accused of firing a gun inside a Menifee home and evading a SWAT team that descended on the rural neighborhood last weekend, was jailed Wednesday in lieu of $1 million bail.

Lucas Rutledge, 37, was arrested Tuesday afternoon when he returned to the residence, where deputies seized various weapons, including an anti- tank weapon, according to sheriff’s Sgt. Aaron Avila.

Deputies were called Saturday afternoon to the 26000 block of Byers Road on a report that a man, later identified as Rutledge, was “acting irrational and discharged a firearm inside the residence,” the sergeant said.

Rutledge eventually exited the residence and surrendered. A search of the property turned up an AT-4 anti-tank weapon launcher, and a hazardous device team was summoned to take possession of it, Avila said.

Three other firearms were seized, including an AR-15 rifle. Rutledge was booked into the Cois M. Byrd Detention Center in French Valley on suspicion of shooting at an inhabited dwelling.