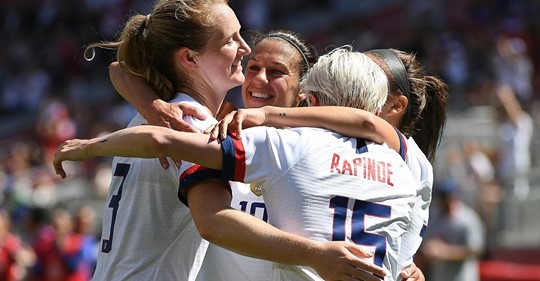 Fresh off its World Cup victory in Paris, the U.S. Women’s National Team will be in downtown Los Angeles Wednesday night for the ESPY Awards, and next month they’ll kick off a five-game Victory Tour with a match against Ireland at the Rose Bowl.

The match is set for 7 p.m. Aug. 3, and it will mark the soccer team’s first game on home soil since clinching its second straight World Cup on Sunday morning.

Officials with U.S. Soccer and Allstate — the corporate sponsor of the Victory Tour — said plans are still being formulated for the locations and opponents for the rest of the five-game series. The dates, however, have already been set for Aug. 29, Sept. 3, Oct. 3 and Oct. 6.

The Rose Bowl match will be broadcast live on ESPN2.

Tickets will go on sale at 10 a.m. Saturday at www.ussoccer.com.

The team is scheduled to attend the ESPY Awards ceremony Wednesday night at the Microsoft Theater in downtown Los Angeles.