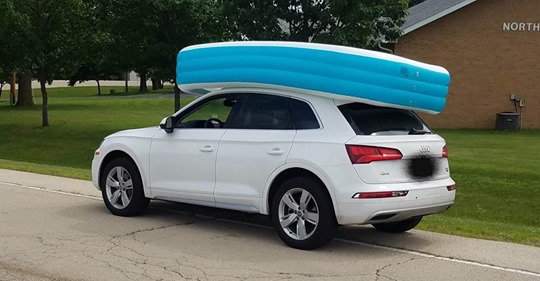 A mother was arrested for having her two daughters ride in an inflatable pool on the top of her car, police said. A concerned citizen called police on Tuesday after seeing children on top of a moving vehicle in Dixon, Illinois, and officers conducted a traffic stop to speak to the driver, who was driving a white Audi Q5.

Jennifer A. Janus Yeager, 49, was arrested on two counts of endangering the health or life of a child and two counts of reckless conduct, Dixon police said.

“During the course of the investigation it was learned that Yeager drove into town to inflate the pool at a friends’ house and had her two juvenile daughters ride inside of the empty pool to hold it down on their drive home,” police said.

Yeager was taken to the Dixon Police Department and posted bond.

Dixon police later tweeted an image of the SUV with the pool, saying, “Having your children sit in an inflatable pool on top of your car while driving will get you arrested.”

There is no number listed for Yeager through public records and it is unclear whether she has a lawyer.