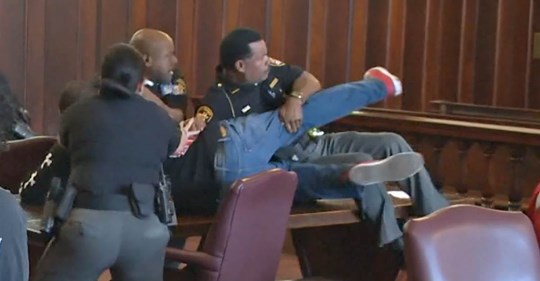 A sentencing hearing for a man found guilty of fatally shooting an Ohio mother two years ago ended abruptly after the woman’s sons attacked the convicted killer.

The shocking courtroom assault happened Thursday in a Mahoning County courtroom and was captured on camera.

Video shows a man wearing blue jeans and a black T-shirt leap over a wooden table and lunge at convicted killer Dale Williams Sr., who was being sentenced for the June 2017 murder of Elizabeth Pledger-Stewart.

Another man wearing orange pants and an orange shirt runs around the table toward Williams as the first man appears to grab Williams’ foot and drag him out of his seat and onto the ground.

Both men then appear to repeatedly hit Williams as several sheriff’s deputies try to separate them. A stun gun was used on one of the men, NBC affiliate WFMJ reported.

Although Greene said he understands that emotions can run high during a hearing, fighting in the courtroom is “completely unacceptable.”

Stewart, 23, and Dees, 30, were both held in contempt of court and sentenced to 30 days each on charges of assault and obstructing official business.

Williams was taken to the hospital to check for injuries, according to WFMJ. He will be sentenced at a later date.

According to the outlet, Williams crashed his car into Pledger-Stewart’s vehicle on June 15, 2017, and then shot her multiple times when she got out. Police arrived at the scene as the shooting was taking place and arrested Williams, who knew Pledger-Stewart. He faces up to 23 years to life in prison, WFMJ reports.