Apple announces ‘disability-themed emojis’ to arrive in the fall 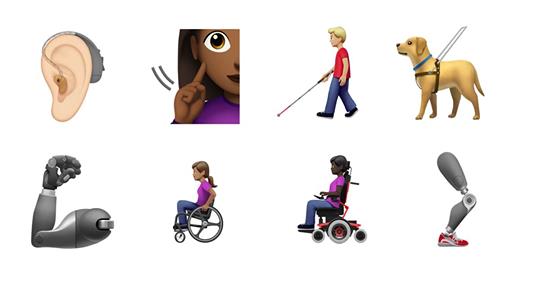 In a move to bring “more diversity to the keyboard,” Apple released new “disability-themed” emojis Tuesday that will be available in the fall.

Users of iPhones will soon be able to send a guide dog, an ear with a hearing aid, a person in a wheelchair, a prosthetic arm and a prosthetic leg, among other new options.

“Celebrating diversity in all its many forms is integral to Apple’s values and these new options help fill a significant gap in the emoji keyboard,” the company said, unveiling the new designs ahead of World Emoji day on Wednesday.

The emojis have been in the works for a while. Apple proposed the designs last fall to the Unicode Consortium, a nonprofit that sets the standards for emojis.

The announcement has been praised by many on social media as an important moment for inclusion for people with disabilities.

“Representation matters and for those living with MS, some of whom have visible disabilities, this is an important way for them to feel included and seen,” said Cyndi Zagieboylo, president and CEO of the National Multiple Sclerosis Society.

The National Organization on Disability (NOD), a nonprofit that focuses on employment issues for people with disabilities, agrees, but added their organization is hoping for more than keyboard representation.

“These new emojis will enable one billion people with disabilities around the world to more fully and authentically express themselves,” NOD’s director of external affairs, Priyanka Ghosh, said in a statement to NBC News. “Perhaps corporate America can also seize upon these new icons to embed disability seamlessly into their everyday lexicons, enabling employees to better communicate with each other and build more disability-inclusive cultures.”

Apple also announced that along with the disability-themed emojis, users will soon be able to personalize the hand-holding couple emojis, opening up more than 75 combinations for the couple’s race and gender.