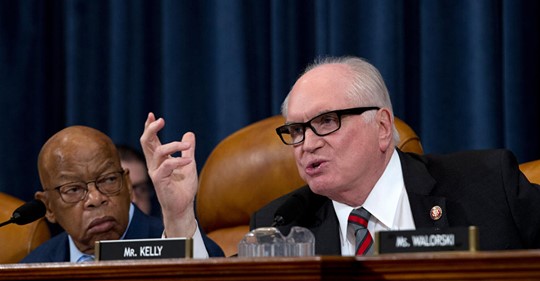 ‘I’m a Person of Color … I’m a White,’ Congressman Says

U.S. Rep. Mike Kelly, a white congressman from western Pennsylvania, told a reporter this week that he believes his Irish and German roots make him a “person of color.”

The Republican’s remarks came during an exchange with a VICE News journalist on Capitol Hill as debate raged Monday and Tuesday over President Donald Trump’s racist tweets against four female, minority congressional colleagues of Kelly’s.

“I think we’re going way beyond the pale right now. They talk about people of color. I’m a person of color,” Kelly said in a recorded interview.

“Which one?” the reporter asked.

“I’m white. I’m a white. I’m an Anglo Saxon. People say things all the time. But I don’t get offended,” Kelly answered.

The Merriam-Webster dictionary defines “person of color” as “a person who is not white.”

The reporter then asked if anyone has ever told Kelly “to go back to your country,” repeating what the president tweeted to the four congresswomen. Three of the four were born in the United States and the fourth emigrated to America as a teenager.

“Yeah, they have as a matter of fact,” Kelly said.

In a statement released Wednesday, Kelly said “it’s time to stop fixating on our differences and focus on what unites us.”

“My broader point in the 5-minute long discussion was that we’re all created equal,” he said. “Attempts by Democrats and the media to divide and define us by race are harmful. We need to elevate our level of discussion.”

Kelly’s comments emerged the same week that Congress voted to condemn Trump for his divisive tweets. It was the first time in a century that a president was condemned by Congress.

Kelly, a Notre Dame University graduate who took over his father’s car dealerships and still operates four dealerships, said much of the outrage over Trump’s insults comes from the Washington D.C. political class.

In western Pennsylvania, he said, it’s a different story.

“Here, in Washington D.C., you worry about all that stuff,” he said. “You go back home where I’m from, people don’t worry about that.”