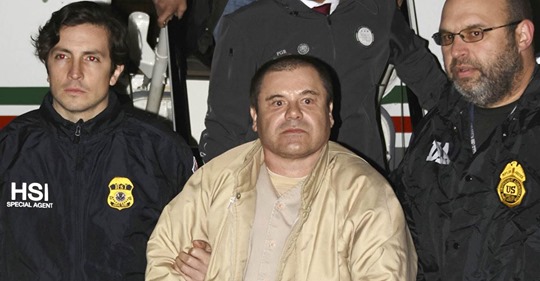 Joaquín Guzmán Loera, the crime kingpin known as “El Chapo” who controlled much of the illegal drug trade across the Western Hemisphere for almost three decades, was sentenced to life in prison plus 30 years in a federal courtroom in New York on Wednesday.

Before he was sentenced, Guzman, 62, told a federal judge in a heavily-guarded Brooklyn courthouse that his case was “stained” by juror misconduct. He said the judge denied him a fair trial on drug trafficking charges “when the whole world was watching.” He said America lacks justice and is corrupt, like other countries.

Guzman also said Wednesday in court that his human rights have been disrespected. He said the last 30 months in jail were torture — saying he doesn’t sleep well, has trouble breathing, doesn’t get to see sunlight, and hasn’t been able to see his wife or daughters.

He also thanked his family, legal team, prison guards and supporters for prayers.

Guzmán, whose nickname refers to his height — it roughly translates as “Shorty” — was responsible for shipping more than 200 tons of cocaine to the United States alone as head of Mexico’s Sinaloa cartel, as well as brutal murders and widespread political payoffs, prosecutors said during his three-month trial in U.S. District Court in Brooklyn, where he was convicted in February.

A life sentence is mandatory under federal sentencing guidelines, but the Justice Department asked Judge Brian Cogan to tack on an extra 30 years because Guzmán illegally used firearms in the commission of his larger crimes.

Guzmán’s attorney, Jeffrey Lichtman, said that because Cogan was required to hand down a life sentence, the additional request further proved that the proceedings against his client were what he called a “show trial.”

Mexican authorities arrested Guzmán in 2014, but they denied a U.S. request for his extradition, declaring it a matter of national sovereignty.

In 2015, Guzmán escaped through an elaborate mile-long tunnel underneath his maximum-security prison cell. He ran free for almost six months, finally being recaptured in January 2016 in the town of Los Mochis, and this time, after a year of negotiations, Mexico agreed when U.S. officials again sought his extradition.

The U.S. and Mexican governments portrayed Guzmán’s arrest and conviction as victories against the deadliest criminal organization in the Western Hemisphere. But analysts say the Sinaloa cartel has continued to hum along in its reign of terror from its base in Culiacán in the Mexican state of Sinaloa.

“Without El Chapo, the Sinaloa Cartel has hardly faltered despite the arrest of some of the group’s top leaders and some other important members,” InSight Crime, a nonprofit investigative group funded by governments and universities, said in an analysis in October.

“The Sinaloa Cartel has a horizontal structure with decision-making authority spread throughout the organization, as opposed to a vertical structure with just one or a few key members calling the shots,” according to InSight. So when Guzmán was decommissioned, Ismael Zambada García, 71, known as “El Mayo,” was able to step in with the aid of two of Guzmán’s sons.

Zambada kept things running smoothly while Guzmán was in custody, “maintained the cartel’s structure and continues to do so today in the drug lord’s absence,” InSight said. Indeed, in 2013 — citing evidence going back as far as 2002 — a U.S. Drug Enforcement Administration organizational chart of the Sinaloa cartel’s leadership positioned Zambada alongside Guzmán as joint leader of the cartel.

Zambada is wanted by the United States on charges of murder committed in furtherance of a drug conspiracy, conspiracy to commit murder in a foreign country, racketeering, drug trafficking, money laundering, illegal use of firearms and kidnapping.

His wife, Emma Coronel Aispuro, was in court Wednesday, as she often was during her husband’s trial, even when testimony portrayed her in a bad light.