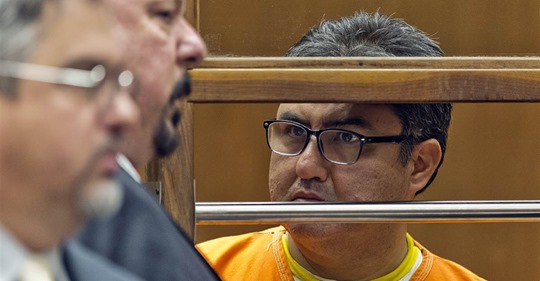 The leader of Mexican megachurch La Luz del Mundo was ordered held without bail Tuesday on charges of child rape and human trafficking after a historically high $50 million bail was set earlier in the case.

Naasón Joaquín García is a danger to the community and a flight risk, Superior Court Judge David Fields ruled.

García’s attorneys said they plan to appeal the decision, arguing that the judge didn’t allow them to present witnesses or consider alternative house arrest measures.

“This was not fair,” lawyer Allen Sawyer said after the hearing.

Law enforcement officers who testified at the bail hearing Monday said $5 million had been raised by numerous people for García’s defense — 10 percent of his previous $50 million bail. Defendants who can post 10 percent of their bail typically are released pending further court actions.

García and two co-defendants were arrested last month. They pleaded not guilty to sexually abusing three girls and a woman in LA County. Officials have said they are continuing to investigate the case and more victims may be involved.

Prosecutors added three new charges of child pornography against García on Monday in an amended complaint.

A visibly upset Fields called the allegations “disturbing” and said he found that the victims “detailed” descriptions to be corroborated by the electronic evidence.

“Future violence is substantially likely,” Fields said. “This is a man who preyed on young girls.”

The judge said he found it “particularly disturbing” that the victims were allegedly told they would be going against God if they didn’t acquiesce to García — who is considered the church’s apostle — and his sexual demands.

“Religion was used against these girls,” Fields said.

García’s attorneys raised a theory of conspiracy, in which they alleged a complaining witness had tried to frame their client, as well as evidence manipulation.

“I don’t find this is a high-tech frame job,” he said.

Police are still going through thousands of photos and videos; what they have already reviewed allegedly includes sexual images of persons believed to be minors, as well as sexual assaults in video footage.

García and co-defendants Susana Medina Oaxaca and Alondra Ocampo are due back in court Aug. 2

Ocampo’s bail was held Tuesday at $25 million, while Oaxaca was earlier freed on $150,000 bail but is under house arrest with GPS monitoring.