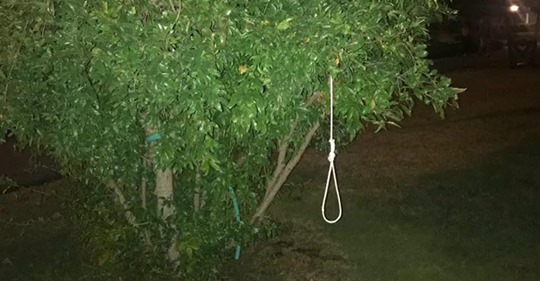 Counselors for a summer program at Stanford University say they spotted a noose hanging from a tree near their dorm last week.

The medical students told NBC Bay Area they spotted the noose Friday night and called Stanford Public Safety. But they felt their concerns were dismissed.

Cheron Perkins of New Orleans took a photo of the noose. She said just the sight of it was enough to scare her.

“My immediate thought was nothing but fear because I’d never seen a noose,” Perkins said. “I was just distraught. I got on Southwest and started looking for a plane ticket.”

Perkins, a med student working as an adviser to high school students about emergency medicine, said many of those involved with the program are minorities, and she feels the noose was a message to them.

A program assistant who asked not to be identified, also saw the noose.

“I was terrified for my life,” the assistant said. “I called my mom, and she was ready to put me on a plane back home. You don’t know who is hanging around and what their actions might be, and we had the most minorities of all the summer camps.”

When program staff called Stanford Public Safety, the response was lacking, they said.

“It kind of seemed to be dismissed, swept under the rug,” one counselor said.

Stanford issued a statement Tuesday, saying in part “it is investigating the noose as a suspicious circumstance, but if additional evidence comes to light, it may be reclassified as a hate crime … such a symbol has no place on our campus.”

“Especially at Stanford University,” she said. “This is a school that says it’s all about diversity and inclusion. It really upset me.”

The noose has since been removed. Stanford said its Acts of Intolerance Office also is responding to the incident.