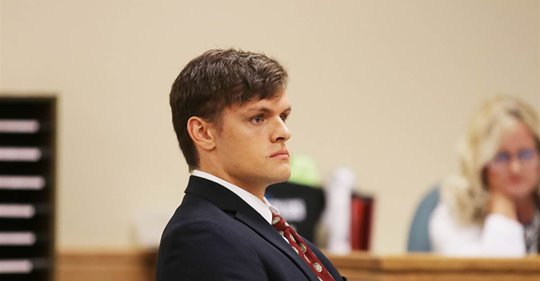 A former East Tennessee State University student who police said disrupted an on-campus Black Lives Matter rally while wearing a gorilla mask and dangling bananas on ropes was cleared of most charges Wednesday.

A jury found Tristan Rettke guilty of one misdemeanor count of disrupting a meeting, and not guilty of two counts each of civil rights intimidation and disorderly conduct, according to NBC affiliate WCYB. The Washington County Court jury in Jonesborough recommended a $500 fine. Witnesses who had been participants in the rally testified that Rettke used racial slurs, intimidated them and made them fearful, according to the station.

Asked by an assistant district attorney how the gorilla mask and strung-up bananas had made them feel, people from the rally said on the stand that the incident evoked thoughts and feelings of racism and slavery, WCYB reported.

The area where the rally took place has a fountain dedicated to the first African American students to attend the university and is considered a “free speech zone,” where students can openly express their beliefs and opinions about an issue, according to the Johnson City Press.

Rettke’s attorney, Patrick Denton, argued his client was exercising his freedom of speech and did not intimidate anyone. Denton said his client was counter-protesting the Black Lives Matter rally.

“What is he? He’s a heckler,” Denton said Tuesday. “He’s a heckler for that protest and, as much as (the assistant district attorney) doesn’t want to acknowledge, that’s speech. It obviously is. We all understand that.”

Denton could not immediately be reached for comment Wednesday.

Video from the day of the incident showed Rettke attempting to distribute the bananas from a burlap sack to demonstrators. The sack was emblazoned with a marijuana leaf and a Confederate flag. He also held up a sign that said “Lives Matter.”

He was escorted from the protest by public safety officers and was later criminally charged by the Johnson City Police Department.