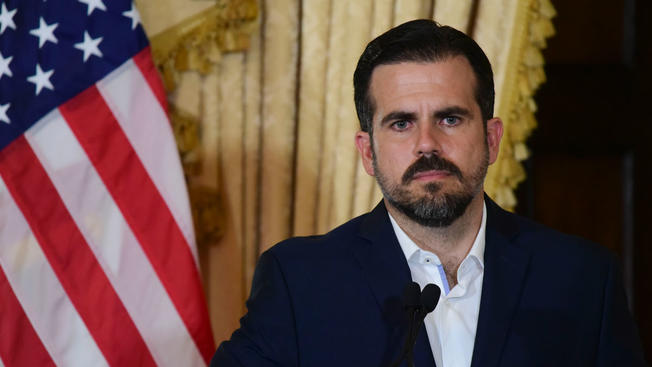 The Puerto Rican Legislature is ready to initiate an impeachment process against embattled Gov. Ricardo Rosselló.

The news on Wednesday came after three attorneys commissionedby the president of Puerto Rico’s House of Representatives, Carlos Méndez Núñez, found five offenses that constitute grounds for impeachment, according to Telemundo and other news outlets.

“Rosselló hasn’t resigned and is presently in Puerto Rico,” the statement read. “We reiterate that any official communication will be shared with the media.”

Rosselló would be the U.S. commonwealth’s first governor to be impeached.

“We concluded that indeed our recommendation to the corresponding body is to proceed with a government trial that starts by presenting a formal accusation document so that the proceedings continue in the corresponding chamber, which is the Senate of Puerto Rico,” Enrique Colón, one of the appointed lawyers, said at a press conference.

News of Rosselló’s impeachment process came a day after NBC News and Telemundo, both owned by NBC Universal, reported that the island’s Justice Department had issued search warrants to confiscate the cellphones of several people who took part in the private chats.

Hundreds of thousands of Puerto Ricans have been protesting for 12 consecutive days, demanding Rosselló’s ouster. Protests continued to grow on the island after Rosselló announced on Sunday that he wouldn’t run for re-election and that he would step down from the leadership of the pro-statehood New Progressive Party.

On Monday, more than a half-million people paralyzed metropolitan San Juan in protest, marching across one of the main highways despite heavy rain in a “March of the People” that ended late in the night as police fired tear gas canisters.

Mass protests were first triggered by the leaking of 889 pages of private chats between Rosselló and some of his current and former officials, as well as close associates.

The chats have opened local and federal probes, which come on top of recent arrests of former officials and government contractors on charges that include alleged fraud involving federal funding. Investigators are looking into possible wrongdoing such as corruption and conflicts of interest.

The leaked chats on the messaging app Telegram rocked the public for their profane, misogynistic and homophobic comments against public officials, celebrities and ordinary islanders, as well as their cynicism on topics that included the deaths following Hurricane Maria in 2017. The chats also revealed the administration’s efforts to smear and bring down political opponents.