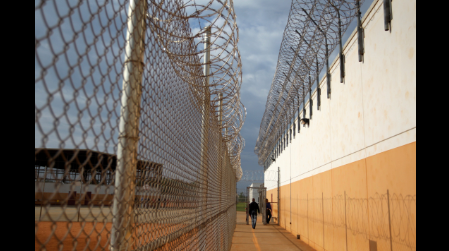 ICE detainee dies in Georgia while waiting to be deported

A 44-year-old Mexican man awaiting deportation has died in Immigration and Customs Enforcement custody in Georgia, the agency said in a statement Thursday.

Pedro Arriago-Santoya had been detained at the Stewart Detention Center in Lumpkin, Georgia — one of the nation’s largest immigrant detention facilities and the subject of CNN’s 2018 series, “Inside America’s Hidden Border.”

He had complained to staff at Stewart of abdominal pain on Saturday, ICE said. That day, he was taken via ambulance to a regional hospital, then transferred the following day to the Columbus hospital “for surgery consultation due to suspected gall bladder disease,” ICE said.

While hospitalized, Arriago-Santoya went into cardiac arrest on Monday.

“Medical staff performed life-saving measures. … Mr. Arriago-Santoya was then placed on a ventilator and moved to the hospital intensive care unit where he remained intubated, on mechanical ventilation, and comatose,” ICE said.

He was pronounced dead Wednesday after going into cardiac arrest again.

Mexican consular authorities have been notified and responded they have been unable to locate Arriago-Santoya’s next of kin, ICE said.

Word of his death sparked swift criticism — and renewed calls for the detention center’s closure — from immigrant-rights advocates, who have alleged for years that the Georgia facility provides inadequate medical care to detainees in its custody.

“We have been raising the alarm about the horrific conditions at the Stewart Detention Center for many years,” said Azadeh Shahshahani, legal and advocacy director for Project South. “Our calls for accountability and redress have fallen on deaf ears.”

Arriago-Santoya’s death marks the fourth time a detainee held at Stewart has died since May 2017.

Efrain Romero De La Rosa, a 40-year-old Mexican national, was found unresponsive in his cell in July 2018 and was later pronounced dead at a hospital. The apparent cause of death was self-inflicted strangulation.

Yulio Castro Garrido, a 33-year-old Cuban national, was diagnosed with pneumonia at Stewart and was hospitalized as his condition worsened. He died in January 2018 at the Mayo Clinic in Jacksonville, Florida.

And in May 2017, Jean Jimenez-Joseph, a 27-year-old Panamanian national, killed himself in solitary confinement at Stewart.

An immigration detainer landed Arriago-Santoya in ICE custody on April 24.

A judge ordered his deportation on June 6 and he had been in ICE custody “awaiting removal to his country of citizenship in accordance with that judicial removal order,” ICE said.

He was transferred to Stewart on July 10, according to Brandon Bissell, a spokesman for CoreCivic, the private company that operates the detention center.

“Upon notification from the hospital of the passing, CoreCivic staff immediately notified our partners with U.S. Immigration and Customs Enforcement (ICE) and an autopsy has been requested,” Bissell said in a statement. “No foul play is suspected and his death appears to be from natural causes.”

ICE said Arriago-Santoya is the seventh person who’s died in the agency’s custody in the 2019 fiscal year, which began in October.

“ICE is firmly committed to the health and welfare of all those in its custody and is undertaking a comprehensive agency-wide review of this incident, as it does in all such cases,” the agency said. “Fatalities in ICE custody, statistically, are exceedingly rare and occur at a small fraction of the rate of the U.S. detained population as a whole.”