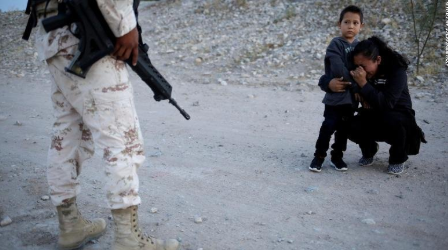 New photos showing the desperation migrants face at the US border are spreading on social media.

One shows a mother, her child, and a Mexican National Guardsman, with whom she’s pleading to allow her to cross into the US.

In that image, taken by Reuters photographer Jose Luis Gonzalez, the mother — identified by the photographer as Lety Perez — is seen squatting on a dirt road. She covers her face with her hand, hiding her tears. Her other arm is wrapped around her 6-year-old son, Anthony, who is looking up at the guardsman.

Other photos in the series also show her pleading with the officer.

The images are the latest in an increasing number of wrenching photos coming from the southern border, depicting both the difficulty of crossing into the US and the migrants’ desperation.

In June, the picture of two dead Salvadoran migrants, a father and daughter washed up in the waters of the Rio Grande, broke into the news. That was followed by the photo of a member of the Mexican National Guard, which was just formed in June, yanking a woman away from the Rio Grande. Last year, a photo of a crying 2-year-old looking up at her mother as the woman is searched by border guards sparked similar controversy.

Gonzalez, the photographer of the latest series, spoke to CNN about the photos, how he captured them, and the people at the center of the crisis.

Tell us about the assignment that led you to these migrants

On Monday morning, I was asked for images of the border and the National Guard. I was walking along the border until dusk because I was hoping to catch the moment when some migrant crosses or was stopped by officers. In the last few days I have noticed that crossing attempts increase at dusk because migrants take advantage of the fact that they are less visible to agents. However, I did not expect the scene I found.

Who are they? What was their story? What happened to them after this moment?

Her name is Lety Perez and her son’s Anthony Diaz, he is 6 years old. Both are migrants from Guatemala. She left her country hoping to give her son a better future. She said she was a single mother; Anthony’s father abandoned her when he was 9 months old and never helped them. She had spent everything she had to get to the border, she cried and implored National Guard officers to let her cross. She asked them not to send her back to her country. Finally, in an oversight of the officer in front of her, she ran into the Rio Bravo (which is dry and full of weeds) and turned herself in to the Border Patrol who was on the other side arresting the migrants that had crossed before.

Was this scene typical of what you’re encountering on the Mexican side of the border?

Yes, ever since the National Guard is at the border. Before, there was no one on the Mexican side to prevent migrants from crossing, now there are officers almost every 100 meters. At first, I saw them trying to hold the migrants physically to prevent them from crossing and handing them over to the Migration Institute, now they just stand in front as if creating a barrier. The vast majority of the women who cross the border are accompanied by their children, sometimes even the men. Although they do not always break into tears, they do ask GN to let them continue their journey.

Did the Mexican guards say anything about the moment?

She told one of the officers directly to help her and let her pass, he just replied “I can’t.” Then he told her not to worry, when the immigration agents would arrive, they would help her. She asked him if they would take her back to her country and he told her again to wait for Immigration (when they intercepted her, they radioed agents from the Migration Institute who also guard the border). When Mrs. Perez managed to cross to the US side, several Mexican officers met at the point where they had stopped her, I don’t know what they talked about.

I’d like to know what happened to her. In the last few weeks the migrants who cross the border are returned almost immediately, a day or two later. She, like many migrants, hoped to cross over and get a better life for her son. I don’t know what she thinks now, knowing that she will be returned to Mexico to wait for a court date.

The photo shows the role Mexico is now playing in the migrant crisis.

President Donald Trump in June suspended threatened tariffs on Mexican goods after reaching an agreement with the Mexican government. The tariffs were meant to put pressure on the Mexican government to do more in stemming the flow of migrants from Central America who are crossing Mexico’s border into the US.

The deal came after Mexico already pledged to send 6,000 National Guard troops to its border with Guatemala to hinder migrant movement. But the new agreement had Mexico stepping up its border patrol throughout the country.

All of this comes a year after Mexico elected a new president, leftist Andrés Manuel López Obrador. The new president, who came into power in December, said on the campaign trail that Mexico wouldn’t do “dirty work” for the United States when it came to immigration enforcement. But since taking office his tone has shifted, and he’s largely accommodated Trump’s demands on immigration.