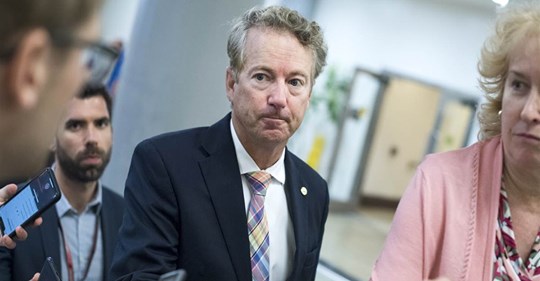 The remarks, given during an interview with Brietbart News, are another personal attack on the Minnesota Democrat, who was the subject of racist attacks made two weeks ago by Trump. The President suggested that Omar and three other Democratic lawmakers, all of whom have been critical of conditions on the US-Mexico border, “go back” to their home countries. Three of the four lawmakers were born in the US, and Omar, who came to the US as a Somalian refugee, became a naturalized US citizen when she was a teenager.

“And so while I’m not saying we forcibly send her anywhere, I’m willing to contribute to buy her a ticket to go visit Somalia,” Paul, who represents Kentucky, said. “And I think she can look and maybe learn a little bit about the disaster that is Somalia — that has no capitalism, has no God-given rights guaranteed in a constitution, and has about seven different tribes that have been fighting each other for the last 40 years.”

“And then maybe after she’s visited Somalia for a while, she might come back and appreciate America more,” he added.

Reached for comment on Tuesday, Paul’s office said they had no additional comment. Omar’s office did not immediately respond on Tuesday to CNN’s request for comment, but earlier this week, Omar shared a tweetabout the remarks by a columnist who said the congresswoman “has visited Somalia more than Paul has – & knows far more about it.”

In a separate tweet shared by Omar, actor Tom Arnold mocked a 2017 assault on Paul by his neighbor Rene Boucher. The attack, which occurred at his home in Bowling Green, Kentucky, left the senator with six broken ribs and bruised lungs and resulted in him being awarded more than $580,000 in damages in a lawsuit against Boucher.

The comments from Trump touched off a firestorm in Washington, causing the House to pass a resolution condemning the racist language the President used in his attacks. The resolution was supported by four GOP House members, with many congressional Republicans coming to the President’s defense in the wake of the attacks.