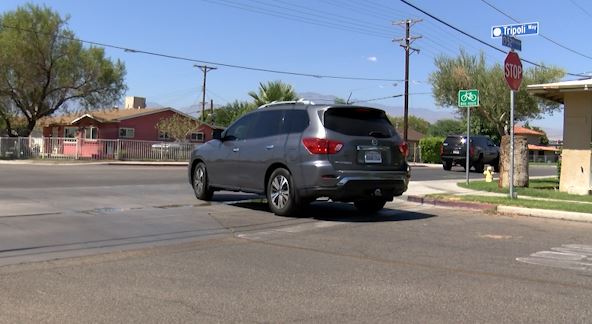 The dangerous intersection of Tripoli and Avenue 52 in Coachella is causing residents and business owners to petition for a stop sign, stop light or further parking restrictions.

“It just crashed against the wall and I turned around,” Armida Aroz, the manager of an apartment complex located at the intersection, said about a collision in the past. “Really scary.”

While managing, Aroz said her office serves as the perfect view for car collisions and close calls.

“There’s been numerous accidents in the time I’ve been here,” she said. “The past four years I can honestly say over 50.”

She said she’s forced to sit back and watch it happen.

Drivers wanting to turn left onto Avenue 52 from her office have a blind spot due to parked cars on the side of the street (Ave. 52). There’s no stop sign at the intersection, only a cross walk that also has blind spots.

“My children are my main concern and the residents of Coachella,” Lupe Rodriguez, a concerned citizen, said. “They shouldn’t have to go through this.”

Rodriguez said he’s been fighting for a stop sign, stoplight, or even just an extended no parking zone to minimize the blind spot at the intersection for years. Unfortunately, he said the requests have fallen on deaf ears with the city.

“We started this petition from all the tenants, all the people,” Aroz said while she held up pages of signatures.

With the petition, Aroz hopes to spark a sense of urgency with the city.

When NBC Palm Springs asked the city of Coachella about the intersection, they said they were aware of the complaints but have only had one official traffic collision in the past four years. Therefore, it was of lower priority.

“We really need some help, we really need to get this done,” Aroz said. “It would be nice to get it done before school starts.”

NBC Palm Springs recommended the options of a stop sign, stop light or larger no parking zone to the city in which they said they’ll look at it.

Aroz said she plans on presenting the petition alongside her tenants at the next city council meeting.