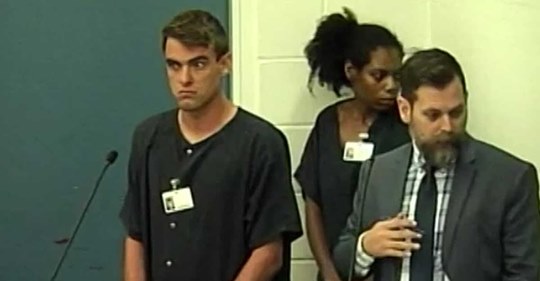 Authorities arrested a Winter Park, Florida, man after they said he made a threat on Facebook that warned people not to go to Walmart next week.

Officials said Richard D. Clayton, 26, wrote on Facebook, “3 more days of probation left then I get my AR-15 back. Don’t go to Walmart next week.”

According to investigators, Clayton used fictitious Facebook accounts in the past to post threats and seems to believe in “white supremacist ideology.”

Officials said while in custody, Clayton was uncooperative and belligerent.

Clayton allegedly told an officer, “I hope that the next call you go to you get blown away and killed.” An arrest report said the man then asked if the officer was Hispanic, saying “They are what is wrong with this country. They come in and are ruining everything.”

Clayton also asked the arresting officer if he was a Nazi multiple times, the report said.

The arrest report said while being taken to jail, Clayton began taking out his genitals and told the officer he was going to pee in his car. When the officer told Clayton he wasn’t Hispanic, Clayton replied he wouldn’t pee in his car, according to the report.

Authorities arrested Clayton just before 5 p.m. Friday and booked him into Orange County Jail on a $15,000 bond.

The arrest was made by the the FDLE’s Joint Terrorism Task Force.

Court records show Clayton has been arrested before. In September, Clayton allegedly got naked and swam into the middle of the Clearwater Beach Super Boat Race in Pinellas County.

The race had to be stopped. His charge in that case was dropped a month later, but he was on probation at the time for a Seminole County DUI case.