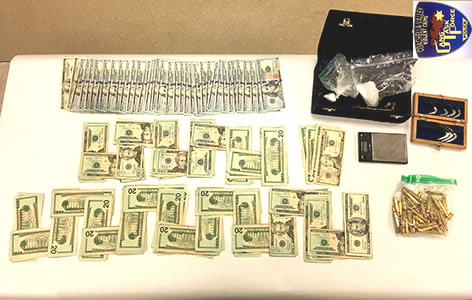 Deputies Monday served a search warrant at a Thermal home and arrested a man who was already out on bail for an unrelated charge when they said they discovered ammunition, drugs and evidence of drug sales.

Riverside County sheriff’s deputies with the Coachella Valley Violent Crime Gang Task Force, along with a SWAT team, found methamphetamine, cocaine, ammunition and $7,000 in cash when they served a warrant at a home in the 65000 block of Van Buren Street in Thermal around 5 a.m. Monday, sheriff’s Sgt. Paul Heredia said.

Ezequiel Ortega Nava, 45, of Thermal, was arrested on suspicion of drug possession with intent to sell, being a felon in possession of ammunition and committing a felony while on bail — Nava had been arrested on Aug. 4 for suspected drunken driving and released on bail the next morning.

Nava was being re-booked into the Indio jail Monday morning, Heredia said.