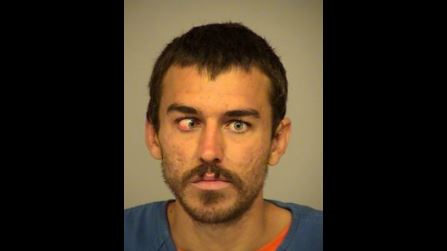 Port Hueneme Police have arrested a homeless man who is suspected of kicking a small dog approximately 15 feet into the air.

The officers responded to a disturbing the peace call at Hueneme Beach last Friday afternoon to discover the transient, Dylan McTaggert, throwing punches at life guards. When he saw the police arrive, he fled on foot and was quickly apprehended after a short chase.

McTaggert had allegedly approached a woman from behind while she was walking along the beach and without provocation, kicked her dog into the air.

The dog, named Sophie, went into shock and fell unconscious.

Police say that Sophie was kicked with such force that it collapsed a lung and displaced her heart.

She’s currently resting at home and is being cared for by her owner, who said it’s been quite an ordeal: “She’s my kid so it’s been really really hard. Friday was bad, Saturday was bad. It took 24 hours before she recognized us… She’s wagged her tail a few times so it’s pretty exciting.”

McTaggert, who lives along the illegal encampments on Ormond Beach, has been contacted numerous times by local police for disturbing beachgoers on Hueneme Beach.

He was booked and later transported to the Ventura County Jail for fighting in public, assault on a lifeguard, and felony animal cruelty. McTaggert is currently scheduled for arraignment Tuesday at the Ventura County Government Center where he is being held in custody in lieu of $25,000 bail.

Chief Andrew Salinas says nearly half the calls Port Hueneme PD gets are transient related: “We share the beach property line with Oxnard and Port Hueneme… These transients come over to the Port Hueneme beach area where we have a pier and facilities and end up ultimately harassing our beach goers. It’s very difficult to enforce right now because of the decriminalized laws in regards to some of our misdemeanors. They don’t stay in custody for very long…. It’s become a revolving door and it’s something we need to address sooner or later.”

Port Hueneme PD announced that going forward they will have an officer specifically assigned to the beach and ask that anyone who may have witnessed the incident to please contact them at 805-986-6530.