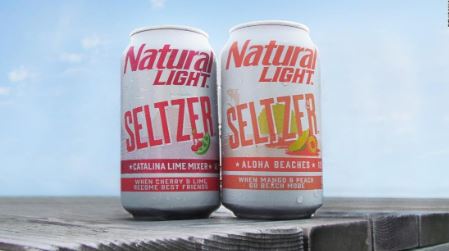 Natural Light hard seltzer? Anheuser-Busch is leaning into the trend

Hard seltzer is big. Anheuser-Busch InBev thinks it’s about to get bigger.

The alcohol company is launching a new line of spiked seltzer under the Natural Light brand, an affordable product marketed to college-aged drinkers. Natty Light Seltzer is not the first hard seltzer product for AB InBev, which already sells Bon & Viv.

There’s no question that hard seltzer is having a moment. Sales of White Claw, the category leader, grew 283% to $327.7 million in July compared to the same period last year. The drink has inspired a YouTube parody video, as well as a number of memes and trend pieces.

Natural Light Seltzer is going to be a little different. The product is priced at about a 20% discount compared to the leading brands, and unlike most hard seltzer brands, which are often sold in packs of four, it will be available in bulk 24-can packages. With about 130 calories and 6% alcohol by volume, it’s also more alcoholic and caloric than other hard seltzers. The drink should be widely available for purchase in the United States in a few weeks. It comes in two flavors: mango and peach, and black cherry and lime.

Anheuser-Busch thinks the trend is more than just a flash in the pan. “This is not a fad,” said Ricardo Marques, Vice President of Core and Value Brands at Anheuser-Busch. “This is here to stay.”

Hard seltzer has mostly become popular on the coasts, Marques said. There’s “a ton of runway” in the rest of the country, as well as in coastal regions, he added. AB InBev believes that Bon & Viv, which Marques noted is “growing rapidly,” will continue to gain traction among health-conscious drinkers looking for beverages lower in alcohol, sugar or calories. The new product will bring in a new audience more focused on budget.

The start of the trend

Hard seltzers hit the scene in 2016. That year, Mike’s Hard Lemonade maker Mark Anthony Brands launched White Claw. Other big companies made their hard seltzer plays around the same time: Anheuser-Busch bought SpikedSeltzer, which led to Bon & Viv, and Boston Beer launched Truly, another popular hard seltzer, all in 2016. But it took a while for the beverage to start gaining traction with consumers.

In 2017, Jose Cuervo’s pre-mixed margarita was the leading beverage in the alcoholic ready-to-drink category, which includes canned cocktails and spiked seltzer, said Beth Bloom, associate director of US Food and Drink for Mintel. The following year, White Claw’s hard seltzers took the lead.

And earlier this year, Anheuser-Busch made a big push for its Bon & Viv line with a Super Bowl commercial, billing it as the first time that a fermented malt beverage was advertised during the big game.

Consumers are likely turning to hard seltzer for the same reasons that they like regular seltzer — it’s got fewer calories and less sugar than other comparable drinks. White Claw and competitor Truly both have around 100 calories per can, and Bon & Viv has about 90 calories per can.

A competitor to light beer

Beer sales have been declining in recent years, Bloom said. So beer brands, like Natural Light, may be launching hard seltzers as a way to “buffer those losses,” she said, noting that beer is still the biggest driver of alcohol sales by volume, far larger than the hard seltzer category. Still, hard seltzers could become an alternative to light beer, she added, in part because it appeals to men as well as women.

Alcohol drinkers have been generally favoring premium beer and liquor. Hard seltzer, a lower-calorie alternative to beer, could steal share away from light beers, according to a recent note from Macquarie Research.

Plus, drinkers have become more interested in reducing alcohol altogether, turning to zero-alcohol spirits and beers to test out drinking without the buzz.

As consumer tastes shift, Anheuser Busch has been working to revitalize Natural Light, an important part of its overall portfolio. It recently launched Naturdays, a strawberry lemonade lager, that it says is performing well.

“We’re listening to consumers” Marques said. “We’re evolving to address those needs. And that’s exactly what Naturdays is all about, that’s what Seltzer is all about as well.”

With Natty Light Seltzer, AB InBev wants to appeal both to Natty Light drinkers and take share away from other hard seltzer brands, he said.