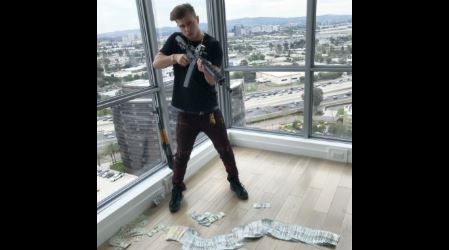 Wyatt Pasek, a 22-year-old man who lived in a high-rise penthouse in Santa Ana, will spend the next 17 years of his life in prison after pleading guilty to selling counterfeit pills laced with fentanyl.

Pasek, known by the moniker “Oxygod,” ran a drug operation in which he used a secret laboratory on the Balboa Peninsula to make thousands of fake pills using fentanyl he and two other men had purchased from Chinese suppliers, according to federal prosecutors. The pills were designed to look like oxycodone.

Pasek plead guilty in November to charges of narcotics-trafficking conspiracy, being a convicted felon in possession of a firearm, and money laundering. He was sentenced Monday to 17 ½ years in prison, according to the U.S. District Attorney’s Office. He had three prior drug-related convictions.

Pasek and his two co-conspirators, 22-year-old Duc Cao of Orange, and 23-year-old Isaiah Suarez of Newport Beach, were arrested back in April 2018 following a six-month multi-agency investigation.

At the time of their arrests, authorities found a pill press lab in Suarez’s apartment with nearly 100,000 fake oxycodone pills, six kilograms of fentanyl, hundreds of fake Xanax pills and bundles of cash, federal prosecutors say.

Cao and Suarez have since been sentenced to seven years and three years in prison, respectively, for their roles in the operation.

Pasek sold the pills online for about a year before being arrested, prosecutors said. He also posted images of himself to social media using the name Yung10x which showed him with wads of cash, posing with guns or expensive cars.

When Pasek was arrested, federal authorities seized $21,000 in cash, a Silver Royal Offshore watch with diamonds, a gold and diamond Bitcoin necklace, two gold bars from his mother’s house and thousands of dollars in cryptocurrency.