Woman had to give birth in Denver jail cell alone, with no assistance, lawsuit says 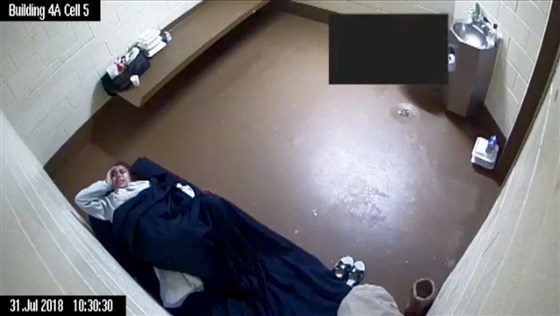 A Denver woman gave birth alone in her jail cell, without any help from on-duty nurses and deputies, as surveillance cameras captured the entire experience, according to a federal lawsuit filed Wednesday.

Diana Sanchez welcomed her baby boy into the world on July 31 last year, on what “should have been one of the happiest days of her life,” her suit filed in U.S. District Court in Denver says.

Instead, it was “a day of unnecessary terror, pain and humiliation that continues to cause her ongoing emotional trauma,” the lawsuit says.

The plaintiff, now 27, was booked into Denver County Jail on July 14, 2018, over an identity theft charge for writing a check off her sister’s account, Sanchez’s lawyer, Mari Newman, told NBC News on Friday.

The new inmate told her jailers she was eight months pregnant, the lawsuit says.

About two weeks later, at 5 a.m. July 31, Sanchez told a deputy that she was going into labor. She eventually “spoke with Denver deputies and Denver Health nurses at least eight times that morning, informing them each time she was experiencing contractions,” the lawsuit claims.

For hours, the pregnant woman screamed in agony, which was “obvious to jail and medical staff alike, via a video feed from her cell” and yet “they took no action to provide” care, the suit claims.

The baby was born at 10:44 a.m., and Denver Fire Department paramedics showed up at about 11 a.m. They clipped the umbilical cord and gave treatment, the suit says.

But until then, Sanchez claims in the suit, jail staff didn’t perform basic post-labor medical moves such as to clear mucus from the baby’s mouth and nose; give antibiotic eye drops to the baby; and administer vitamin K and hepatitis B shots to the newborn.

In addition, Sanchez was at the time taking methadone for opiate withdrawal, which could potentially have presented a risk for the baby, the suit says. “No nurse at Denver County Jail took any steps to provide necessary care to address risk factors to Baby J.S.M. associated with Ms. Sanchez’s use of prescribed methadone, or other high-risk prenatal issues,” according to the suit.

“Ms. Sanchez was forced to deliver Baby J.S.M. on a cold, hard bench, feet away from a toilet, in a jail cell at the Denver County Jail, all alone and with no medical supervision of treatment.”

Sanchez names the city and the county of Denver, the Denver Health and Hospital Authority, four individual deputies and two nurses as defendants in the lawsuit.

“We empathize with anyone who is in jail while pregnant including Ms. Sanchez,” according to Denver Sheriff’s spokeswoman Daria Serna, in a statement issued on Thursday.

“Ms. Sanchez was in the medical unit and under the care of Denver health medical professionals at the time she gave birth,” Serna said. “To make sure nothing like this happens again, the Denver Sheriff Department has changed its policies to ensure that pregnant inmates who are in any stage of labor are now transported immediately to the hospital. Unfortunately, because there is a lawsuit pending, we are unable to provide further comment at this time.”

A Denver Health and Hospital Authority spokesman said that “this is a pending legal matter we are not able to comment at this time.”

In regard to the identify theft charge, Sanchez’s lawyer said her client “has taken responsibility” for that act and the case has been resolved