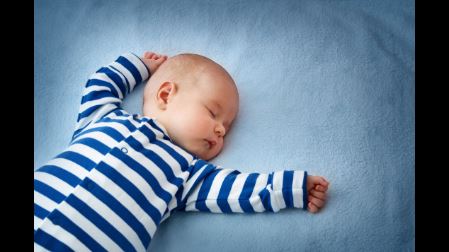 Baby monitors have come a long way. Where once parents were alerted to their baby’s cries by a radio-like crackle, today’s designs incorporate everything from video and motion sensors to temperature gauges.

Now Google is considering technology that could use artificial intelligence to keep your child safe.

The internet search giant has worked on a product that promises to warn parents before their little one has even woken up.

The device would aim to determine when the baby is “in a non-auditory discomfort state” and inform caregivers up to 10 minutes ahead of them waking, according to a patent application filed by Google in the United States.

According to the document, which was lodged last year but has only just been made public, eye-tracking technology would detect when a baby is awake, asleep or close to stirring.

Using video streaming, audio recordings and AI, the device would monitor the baby’s behavior against a database of normal patterns.

Based on the infant’s movements and any noise it makes, it would detect anything out of character and subsequently issue an alert if the baby appears uncomfortable.

It would also take into account the baby’s position, whether he or she is lying down, kneeling, standing up or otherwise.

An alert could be issued before the baby cries or even wakes up, according to the patent, which was first reported by CNBC.

The patent filing states: “While a baby’s cry may alert his parents to the baby being in distress, sometimes a baby will not audibly indicate his distress. For example, if the baby is tossing in his sleep, is awake and moving around when the baby is expected to be asleep, or worse, is choking, tangled in bedding, or otherwise is in a dangerous position, the baby is in distress but may not be crying.

“Therefore, in some circumstances, a parent may wish to be alerted to the occurrence of such a worrisome situation.”

It could also identify when the baby “is likely to wake up imminently,” be it in the next two, five or even 10 minutes, according to the filing.

A spokesperson for Google told CNN: “We file patent applications on a variety of ideas that our employees come up with. Some of those ideas later mature into real products or services, some don’t. Prospective product announcements should not necessarily be inferred from our patent applications.”

Earlier this year Pampers, owned by Procter & Gamble, announced a line of smart diapers to track a child’s urine and sleep. The Lumi by Pampers line includes an activity sensor that secures to a “landing” on the front of a baby’s diaper. It comes with a baby monitor and a 10-day supply of diapers. The sensor works with a corresponding app to log the kid’s pee and identify patterns.