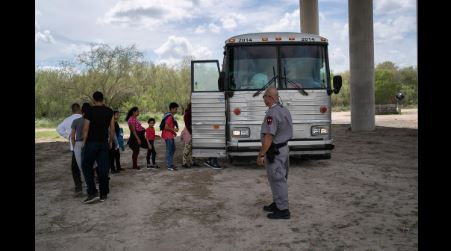 The Supreme Court cleared the way for the Trump administration’s rule that dramatically limits the ability of Central American migrants to claim asylum to go into effect nationwide while the appeals process plays out.

Wednesday’s order is a victory for the Trump administration, which argued the rule was necessary to screen out “asylum seekers who declined to request protection at the first opportunity.”

The rule, from the departments of Justice and Homeland Security, would prohibit migrants who have resided in or traveled through third countries from seeking asylum in the US, therefore barring migrants traveling through Mexico from being able to claim asylum.

Justices Sonia Sotomayor and Ruth Bader Ginsburg noted their dissent. Five justices were needed to grant the request; the votes of the others were not publicly announced.

“Once again the Executive Branch has issued a rule that seeks to upend longstanding practices regarding refugees who seek shelter from persecution,” Sotomayor wrote, joined by Ginsburg, later referring to “some of the most vulnerable people in the Western Hemisphere.”

“Although this Nation has long kept its door open to refugees — and although the stakes for asylum seekers could not be higher — the Government implemented its rule without first providing the public notice and inviting the public input generally required,” Sotomayor added.