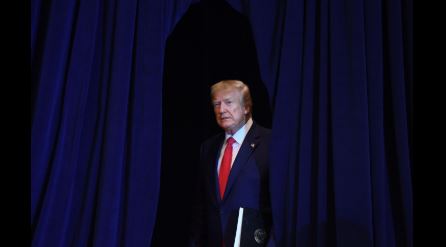 More than 300 former national security officials have come out in support of an impeachment inquiry into Donald Trump, arguing the President’s actions in regard to Ukraine are a “profound national security concern.”

“President Trump appears to have leveraged the authority and resources of the highest office in the land to invite additional foreign interference into our democratic processes,” a statement signed by the officials and dated Friday reads. “That would constitute an unconscionable abuse of power.”

The statement was released by the National Security Action, an advocacy group formed in 2018 by two former national security advisers in the Obama administration to oppose Trump’s foreign policy.

The bulk of the statement’s signees are former Obama officials, but the list also includes officials who have served in both Republican and Democratic administrations.

Former officials of the intelligence community, the State Department, the Department of Homeland Security, and the National Security Council staff are among the signees.

“As national security professionals, many of us have long been concerned with President Trump’s actions and their implications for our safety and security,” the statement read. “Some of us have spoken out, but many of us have eschewed politics throughout our careers and, as a result, have not weighed in publicly.”

“The revelations of recent days, however, demand a response,” they added.

One of the signees, former US Ambassador to NATO Nicholas Burns, said Friday on CNN’s “Newsroom” that he feels this letter is unique because of its timing. “What we’re trying to say in this letter is that it is now time to begin the impeachment proceedings. Personally, I think the President should be removed from office because he’s shamed the country and he’s tried to hold himself above the law,” said Burns, a longtime Foreign Service officer.

House Speaker Nancy Pelosi announced Tuesday a formal impeachment inquiry into Trump over the allegations that he attempted to pressure a foreign leader for personal political gain.

A White House transcript of a July 25 phone call between Trump and Ukrainian President Volodymyr Zelensky showed that Trump asked Zelensky to investigate former Vice President Joe Biden, a 2020 candidate, and Biden’s son. The rough transcript also raised questions of whether Trump offered a quid pro quo over military foreign aid to Ukraine for dirt on a political rival. There is no evidence of wrongdoing by either Joe or Hunter Biden.

The July phone call was included in a whistleblower complaint publicly released Thursday. In the complaint, the whistleblower alleged Trump abused his powers to “solicit interference” from Ukraine in the upcoming 2020 election, and the White House took steps to cover it up. Trump has denied that there was any wrongdoing.

“If we fail to speak up — and act — now our foreign policy and national security will officially be on offer to those who can most effectively fulfill the President’s personal prerogatives,” the former officials said in their statement.

“We do not wish to prejudge the totality of the facts or Congress’ deliberative process,” they said, adding, “At the same time, there is no escaping that what we already know is serious enough to merit impeachment proceedings.”