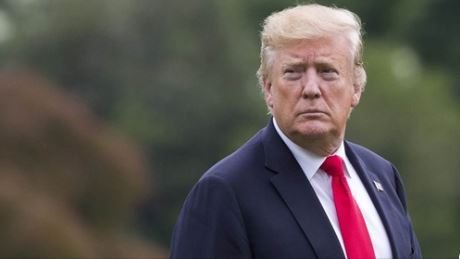 Trump says he wants to meet whistleblower: ‘I deserve to meet my accuser’

President Donald Trump on Sunday escalated his rebuke of the anonymous whistleblower at the center of the mounting Ukraine controversy after House Democrats launched an impeachment inquiry against him, asserting that he deserves to “meet my accuser.”

“Like every American, I deserve to meet my accuser, especially when this accuser, the so-called ‘Whistleblower,’ represented a perfect conversation with a foreign leader in a totally inaccurate and fraudulent way,” Trump tweeted before taking aim at House Intelligence Committee Chairman Adam Schiff who confirmed earlier Sunday there is a tentative agreement for the whistleblower to testify before his committee.

“His lies were made in perhaps the most blatant and sinister manner ever seen in the great Chamber. He wrote down and read terrible things, then said it was from the mouth of the President of the United States. I want Schiff questioned at the highest level for Fraud & Treason,” Trump said.

Lawyers for the whistleblower sent a letter to the acting Director of National Intelligence Joseph Maguire on Saturday outlining “serious” safety concerns for their client as Trump continues to take aim at the person.

“The purpose of this letter is to formally notify you of serious concerns we have regarding our client’s personal safety,” the letter says, adding that recent comments by Trump are reason for “heightened” concern.

“The events of the past week have heightened our concerns that our client’s identity will be disclosed publicly and that, as a result, our client will be put in harm’s way.”

The letter also thanks Maguire’s office for “support thus far to activate appropriate resources to ensure their safety.” While the whistleblower’s attorneys wouldn’t elaborate on what those resources are, they strenuously denied their client is under federal protection as reported Sunday by CBS’ “60 Minutes.”

Mark Zaid, one of the whistleblower’s lawyers, said in a statement given to CNN, “60 Minutes completely misinterpreted the contents of our letter.” He had was not available for comment about Trump’s Sunday tweets. The television program tweeted late Sunday that “60 Minutes stands by its sources and reporting on the whistleblower.”

Trump’s tweets come days after the release of the whistleblower complaint that alleges Trump abused his official powers “to solicit interference” from Ukraine in the upcoming 2020 election, and that the White House took steps to cover it up. Trump has denied any wrongdoing. A rough transcript released by the White House shows Trump repeatedly pushed Ukrainian President Volodymyr Zelensky to investigate former Vice President Joe Biden, his potential 2020 political rival, and his son, Hunter Biden.

There is no evidence of wrongdoing by Joe or Hunter Biden.

Even before the whistleblower complaint was made available to lawmakers, House Speaker Nancy Pelosi declared Trump had betrayed his oath of office and announced this past week she was opening a formal impeachment inquiry into the President.

Trump on Sunday also echoed his previous attacks on the whistleblower and promised “Big Consequences” for anyone who assisted in providing the person information.

“I want to meet not only my accuser, who presented SECOND & THIRD HAND INFORMATION, but also the person who illegally gave this information, which was largely incorrect, to the ‘Whistleblower,'” he said. “Was this person SPYING on the U.S. President? Big Consequences!”

Trump said last week that whoever provided the whistleblower with information about his call with Zelensky is “close to a spy,” and said that in the old days spies were dealt with differently. The comment prompted three House chairmen — including Schiff — to call on the President to stop attacking the whistleblower.

“The President’s comments today constitute reprehensible witness intimidation and an attempt to obstruct Congress’ impeachment inquiry. We condemn the President’s attacks, and we invite our Republican counterparts to do the same because Congress must do all it can to protect this whistleblower, and all whistleblowers,” they said. “Threats of violence from the leader of our country have a chilling effect on the entire whistleblower process, with grave consequences for our democracy and national security.”