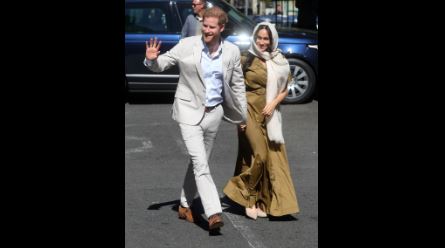 Meghan, the Duchess of Sussex, is suing a UK tabloid, alleging that a private letter was published in the Mail on Sunday illegally. In an extraordinary statement announcing the move, her husband Prince Harry also accused the newspaper of editing the letter selectively to hide “lies” the paper had told about the Duchess — a claim that the newspaper specifically denies.

“Unfortunately, my wife has become one of the latest victims of a British tabloid press that wages campaigns against individuals with no thought to the consequences — a ruthless campaign that has escalated over the past year, throughout her pregnancy and while raising our newborn son,” Harry wrote in an online statement that referenced the treatment of his late mother, Princess Diana, saying he feared history “repeating itself.”

Harry added that “this particular legal action hinges on one incident in a long and disturbing pattern of behavior by British tabloid media. The contents of a private letter were published unlawfully in an intentionally destructive manner to manipulate you, the reader, and further the divisive agenda of the media group in question.”

Law firm Schillings, which is representing the Duchess, said legal proceedings had been initiated against the Mail on Sunday, and its parent company Associated Newspapers, over the misuse of private information, infringement of copyright and breach of the UK’s Data Protection Act 2018.

A Mail on Sunday spokesman said, “The Mail on Sunday stands by the story it published and will be defending this case vigorously. Specifically, we categorically deny that the Duchess’s letter was edited in any way that changed its meaning.”

Harry and Meghan are currently traveling in Southern Africa. The timing of the lawsuit is not related to their travels, but rather to specific legal advice, a palace source told CNN Tuesday. The source asked not to be named discussing the couple’s private business.

‘My deepest fear is history repeating itself’

In his statement, Harry said that he and his wife believed in “objective, truthful reporting” and that the couple regarded the freedom of the media as a “cornerstone of democracy.”

But he also said that he felt some reporting about his wife was “bullying” and that he feared “history repeating itself” — an apparent reference to Diana, who was the target of fierce media attention and died in a car crash in Paris while her driver fled paparazzi.

“My deepest fear is history repeating itself. I’ve seen what happens when someone I love is commoditised to the point that they are no longer treated or seen as a real person,” he said.

“I lost my mother and now I watch my wife falling victim to the same powerful forces.”