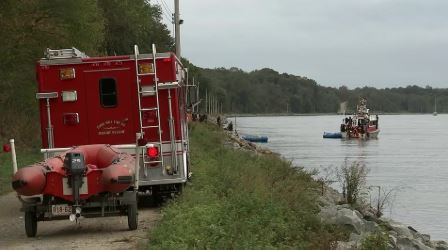 An 18-year-old died trying to save his family from a car submerged in water after it plunged off a gravel road and into a canal in Delaware Sunday morning.

The teen was driving his two younger brothers, his girlfriend, and a cousin to a youth football game around 9:41 a.m. ET when their car went into the Chesapeake & Delaware Canal about 20 miles southwest of Wilmington, Delaware, according to authorities.

First responders located a 16-year-old girl on the canal banks in Middletown about a mile west of the William Roth Bridge. She told them the 18-year-old helped her get to shore and then returned to the water to rescue the other three passengers.

“However he died as a result of his efforts to do that,” Master Corporal Michael Austin, a Delaware State Police public information officer, said in a press conference Monday morning.

His body was recovered from the water shortly after rescuers arrived, he added.

Multiple police, fire, maritime and scuba units responded to the incident. Their efforts “transitioned from a search and rescue mission to a search and recovery mission as the day progressed,” Austin said.

Police said the bodies of two other male passengers, ages 16 and 12, were found in the vehicle, a Chevy HHR, when it was removed from the water Sunday evening.

The body of a 6-year-old boy has not yet been recovered, police say.

Authorities are using side scan sonar to locate objects in the water, Austin said.

“That side scan sonar is able to detect images — they’re very grainy, very shadowy — but it will show some sort of shape down there,” he said, adding that divers will enter the water to investigate relevant detections.

The search — involving the Fish & Wildlife Natural Resources Police, Delaware State Police maritime and scuba units, and Pennsylvania State Police cadaver dog teams — “will remain and it will continue indefinitely,” according to Austin.

Authorities don’t have information on the route of travel the occupants of the vehicle took, how fast the car was traveling, or what the passengers were doing prior to entering the canal banks, but are investigating the incident as a “motor vehicle crash,” Austin said.

Members of the community have offered their assistance in search efforts but “the best thing for people to do is avoid the area,” he said.

“Let our equipment and our personnel do the work,” he added.

At the family’s request, none of the victims have been identified by police.

Investigators have not yet determined what led to the crash.