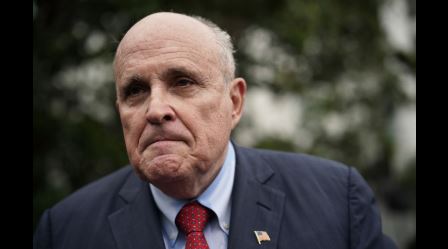 In a series of tweets, Graham, a South Carolina Republican, wrote, “Have heard on numerous occasions disturbing allegations by @RudyGiuliani about corruption in Ukraine and the many improprieties surrounding the firing of former Prosecutor General Viktor Shokin.”

“Given the House of Representatives’ behavior, it is time for the Senate to inquire about corruption and other improprieties involving Ukraine,” he wrote, adding, “Therefore I will offer to Mr. Giuliani the opportunity to come before the Senate Judiciary Committee to inform the committee of his concerns.”

In response to a request for comment on Graham’s announcement, Giuliani told CNN, “Love Lindsey, but I am still a lawyer and I will have to deal with privilege.”

But Giuliani added, “Given the nature of his invitation about my concerns I might be able to do it without discussing privileged information.”

House Democrats are pursuing an impeachment investigation into the President and his contacts with Ukraine, triggered by a whistleblower complaint alleging that Trump attempted to “solicit interference from a foreign country” in the 2020 election and labeling Giuliani as a “central figure” in the controversy.

House Democrats have subpoenaed Giuliani for documents related to Ukraine as part of their impeachment inquiry.

Graham, a former critic turned Trump ally, has emerged as a fierce defender of the President over the Ukraine matter.