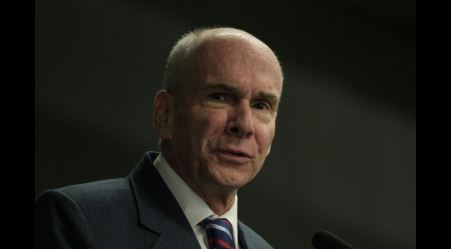 Michael McKinley, the former State Department adviser who resigned last week, is scheduled to testify Wednesday before the congressional committees leading the House impeachment investigation, according to two congressional sources.

McKinely is appearing for a transcribed interview, according to one of the sources, which indicates he is not coming under subpoena.

McKinely’s appearance is part of a packed week for the House Intelligence, Foreign Affairs and Oversight Committees conducting the impeachment inquiry into President Donald Trump and Russia, with as many as five current and former administration officials appearing this week. The committees are turning their scope beyond just the State Department with their first witness scheduled from the Pentagon.

The pace of the witness interviews signals how the committees are trying to work as expeditiously as possible to gather information as part of the investigation into the President’s July call with Ukrainian President Volodymyr Zelensky, the push for an investigation into Vice President Joe Biden and his son and the freezing of US aid to Ukraine.

The committees also have a host of deadlines for documents to be turned over this week — including from government agencies and the President’s personal attorney Rudy Giuliani — although it’s unclear how much compliance they will get given the White House’s stance that the probe is illegitimate.

Despite the White House position, many officials are still appearing — particularly if they receive subpoenas.

US Ambassador to the European Union Gordon Sondland, who appears in text messages provided to the committee that link the Ukrainians publicly announcing an investigation with the meeting between Trump and Zelensky, is scheduled to appear on Thursday. Sondland did not appear last week after being directed not to testify by the White House, but he said he would appear this week after Democrats issued a subpoena.

On Tuesday, the committees are scheduled to hear from Deputy Assistant Secretary of State George Kent in a deposition. But State Department counselor Ulrich Brechbuhl, who had been included on previous deposition schedules, is no longer slated to appear this week, according to one source.

Then on Friday, the committees will hear from their first Pentagon witness, Laura Cooper, who is the deputy assistant secretary of defense for Russia, Ukraine and Eurasia.

Fiona Hill, Trump’s former top adviser to Russia, appeared Monday under subpoena for a closed-door deposition, where she told lawmakers she had high praise for ousted US Ambassador to Ukraine Marie Yovanovitch and objected to the ambassador’s ouster earlier this year.