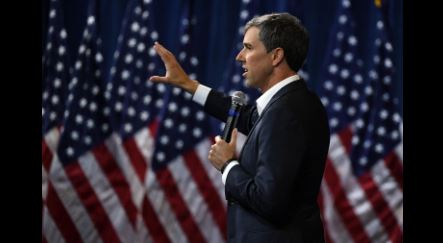 Former Rep. Beto O’Rourke struggled to explain on Wednesday how he would make people who wish to do harm with an assault-style weapon to comply with his proposed mandatory gun buyback, a plan that divided Democrats at Tuesday’s primary debate hosted by CNN and The New York Times.

O’Rourke’s plan includes a ban on assault-style weapons and for the federal government to buy back firearms, including AK-47s and AR-15s, for a “fair price” — or otherwise face a fine.

Pressed by CNN’s Alisyn Camerota Wednesday on how he planned to get assault-style weapons from people who would be reluctant to hand them over, O’Rourke, a former US representative from Texas, insisted that Americans would abide by the law.

“It’s pretty simple. As with any law in this country, we would expect our fellow Americans to follow the law,” O’Rourke said on CNN’s “New Day.”

Camerota then asked, “If they’re mass shooters, if they want to do harm to people, they’re not going to follow the law. So then, what’s your plan?”

“I don’t know that you make any law or stop making any law because you fear that some people will not follow a law, in any part of American life,” O’Rourke replied.

O’Rourke did not say how he would remove firearms from anyone who wouldn’t comply with his proposed law despite repeated questions from Camerota, but said he is not suggesting a door-to-door “confiscation” of firearms.

“There are so many instances where the proposals that we’ve made, whether it is a universal background check, or a ‘red flag’ law, or ending the sale of weapons of war … would have stopped many of the shootings that we see in a country that loses 40,000 people a year to gun violence. Would it stop every single shooting? No. But that should be no excuse for not taking action now while we have the opportunity to do the right thing,” O’Rourke said.

O’Rourke’s campaign disputed that he was struggling to outline specifics on how to deal with people who do not comply with the mandatory buyback.

“Beto was very clear about how his law is enforced. If someone does not voluntarily comply, and they bring those weapons into public space, or if a police officer discovers them in the course of their regular duties, or if that individual is publicly and flagrantly flouting the law, the officer would take that assault weapon into custody,” Lauren Hitt, a spokesperson for the O’Rourke campaign, told CNN.

Under his proposal, individuals who don’t participate in the mandatory buyback would be fined.

Hitt told CNN on Thursday that O’Rourke is not proposing prison time for individuals who refuse to surrender their assault weapons.

O’Rourke has cited Australia as an example of a country that implemented a mandatory buyback program in response to a mass shooting.

O’Rourke proposed in August a mandatory buyback for assault-style weapons and a voluntary buyback program for handguns in the wake of a mass shooting in his hometown of El Paso, Texas. During last month’s Democratic presidential debate, O’Rourke had declared: “Hell, yes, we’re going to take your AR-15, your AK-47.”

To fund the program, his plan would raise the excise tax on gun manufacturers and increase fines against gun traffickers.

“You just made it clear that you don’t know how this is actually going to take weapons off the street,” he said to O’Rourke. “If you can develop the plan further, I think we can have a debate about it.”

O’Rourke hit back, criticizing Buttigieg’s past characterization of the proposal as a “shiny object.”