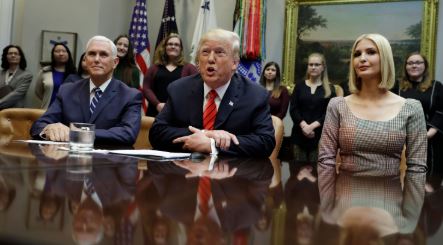 President Donald Trump on Friday video conferenced two NASA astronauts in space to congratulate them as they completed the first all-female spacewalk in history.

Trump praised the astronauts, Christa Koch and Jessica Meir, for their “historic” feat and hailed the women as “brave, brilliant women … who represent our country so well.”

The phone call began with laughter after a delay in response from the astronauts in space.

“Station — this is President Donald Trump do you hear me?” Trump began the phone call.

After a long pause, the astronauts finally said “hello” to the President, to which he responded: “I was starting to get worried about you. You’re in an interesting place.”

One reason for the delay? White House adviser Ivanka Trump told the room that it was the first time astronauts have spoken to a president outside of a spaceship since 1969.

“Women and girls around the world are seeing some of their earliest dreams realized today with this historic all-women spacewalk,” Ivanka Trump said in a statement following the call. “Women in STEM are a force to be reckoned with and advocating for increased access to these fundamental educational skills has been some of the most important work I’ve been able do.”

The spacewalk officially began at 7:38 am ET Friday and will last for about five or six hours. The spacewalk started when the batteries in their spacesuits activated. Then, they exited the airlock.

In order to tell the astronauts apart, Koch’s helmet camera views will bear the number 18 and Meir’s will be number 11. Koch’s spacesuit also has red stripes on it.

This will be the fourth spacewalk for Koch and the first for Meir. Based on their position on the platform, the astronauts will be able to see the Earth pass beneath their feet.

Upon watching the spacewalk begin, NASA astronaut Tracy Dyson said she hopes this is just the first all-female spacewalk and that it becomes a normal occurrence.

Earlier this year Trump announced he was adding $1.6 billion to NASA’s budget “so that we can return to Space in a BIG WAY!” announcing in a tweet from May, “under my Administration, we are restoring @NASA to greatness and we are going back to the Moon, then Mars.”