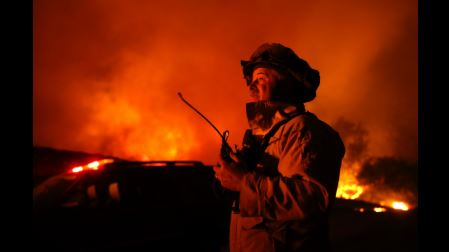 The California Department of Emergency Services operations center has been operating at it’s highest lever for two weeks. The center is buzzing with representatives from every major agency like Cal Fire, the CHP, water and power, National Weather Service, and the Department of Education to name a few.

“The room was at full capacity and we operate and a 24 hour a day basis,” says Bryan Mays, the public information officer for Cal OES.

They’re trying to solve problems and anticipate needs for the community and first responders during this state of emergency created by the wildfires burning across the state. While they’re no strangers to wildfires, this extreme wind event unleashed something they’ve never dealt with.

“This is the first time that we have had to not only deal with wildfires and evacuations but at the same time have that happen without power in large areas and that’s created a set of issues and problems that we’ve never faced before,” says Mays.

Getting people out safely without power is dangerous and even getting emergency alerts out to those in harm’s way can be an issue. Things we’ve come to count on to get information, like cell phones and the internet, may not be operational.

“We’ve seen instances where during these public safety power shut offs and during these wildfires the cell towers have been down in certain areas and it makes getting messages out to people even more difficult,” says Mays.

They have also been helping coordinate the National Guard who is playing a major role in firefighting efforts and law enforcement.

“They’ve been providing militarily troops helping with some of these areas that have been evacuated keeping people out, letting residents in keeping any kind of looting from happening,” he says.

While they’re keeping a close eye on the Maria Fire burning in Ventura County, firefighters are gaining ground on most of the fires that have ravaged the state.

“We’re starting to see the containment numbers pop up, the winds die down and we look like that we maybe have turned a curb on this and get a chance and get a chance to breathe and reset,” he says.

He can’t say enough about the brave men and women on the front lines, “If you see some of those guys men and women are on the street just shake their hand and pat them on the back because they have certainly done a unbelievable at saving thousands of homes and lives in the process.”