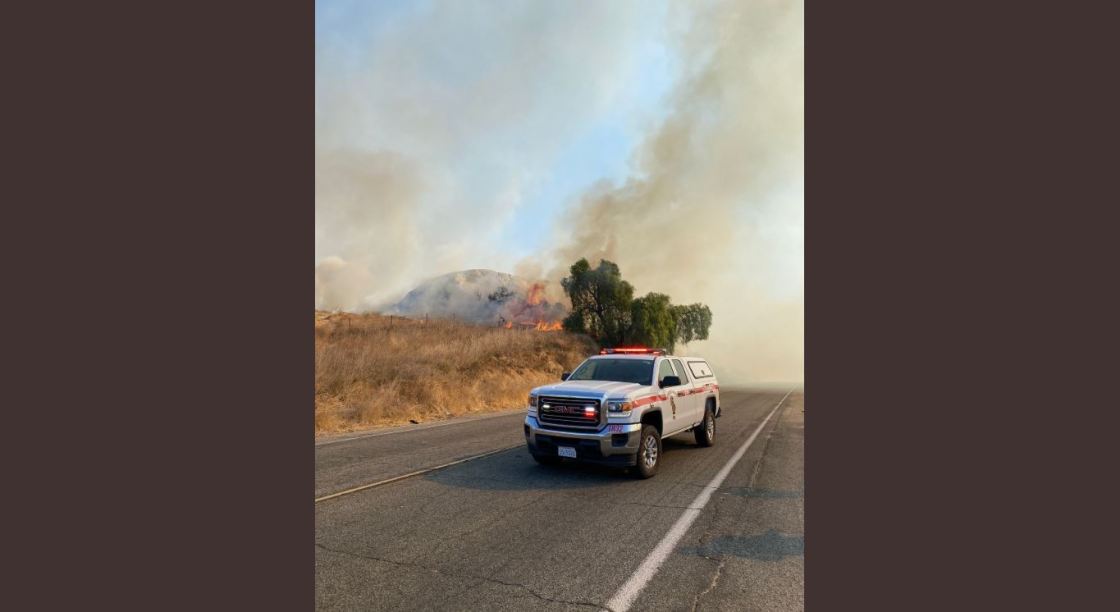 A brush fire in Jurupa Valley that started at the end of a police pursuit of a stolen car, destroyed three homes and two outbuildings and burned 328 acres is now 100% contained, authorities said Monday.

The “46 Fire” was reported at 12:40 a.m. Thursday in the 5300 block of 46th Street, at the west end of Flabob Airport, according to the Riverside County Fire Department.

The wind-whipped fire expanded to 75 acres in less than two hours amid extreme red flag conditions, prompting evacuations for residents in neighborhoods south of Limonite Avenue, west of Crestmore Road, east of Van Buren Boulevard and north of the Santa Ana river bottom. Residents in an area bordered by Riverview Drive, 46th, Calle Hermosa and Rio Road had previously been evacuated.

All evacuation orders were lifted by 2 p.m. Thursday.

The driver, 23-year-old Bryan Alexis Anguiano, refused to stop and sped away toward Jurupa Valley, where sheriffs deputies joined the chase, Railsback said.

The suspect “drove over several curbs and fencing,” blowing car tires as he careened into a vacant field near the Santa Ana River bottom at 46th Street and Crestmore Road, the officer said.

“It appears heat from the stolen vehicle’s wheels ignited a fire underneath it,” Railsback said. “The car became fully engulfed and led to a vegetation fire in this field and river bottom area.”

Anguiano and his passenger, 28-year-old Kevin Alonso Hidalgo, were apprehended at 1:15 a.m. in the area of Arlington Avenue and Van Buren Boulevard in Riverside.

About 200 firefighters worked to encircle the brusher, with the help of several Cal Fire water-dropping helicopters.

One minor injury was reported, but it was unclear whether the injured person was a civilian or a firefighter.