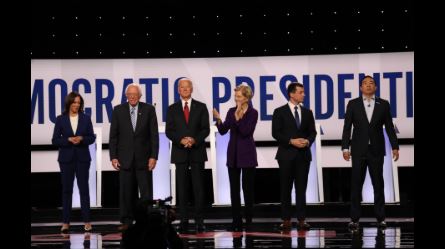 December Democratic debate to be held at Loyola Marymount University

The new location comes after the DNC announced earlier in the week that the debate would not be held at the University of California, Los Angeles, due to a labor dispute between the university and a local union, according to an email the DNC sent to the Democratic candidates. PBS NewsHour and Politico will co-host the debate.

“We welcome the 2020 Democratic presidential candidates to campus, continuing LMU’s long-standing tradition of rigorous inquiry, debate, and civic engagement,” LMU President Timothy Law Snyder said in a statement. “As a nationally renowned, highly ranked university in the Jesuit and Marymount traditions, LMU is a destination for world leaders whose ideas confront humankind’s most challenging issues. Together, we seek to create the world we want to live in.”

The December debate will require a new set of qualifying benchmarks that candidates must meet in order to participate. Candidates must receive 4% in at least four national or early state polls that meet the DNC’s criteria or 6% in two early state polls, all of which must be released between October 16 and December 12. Candidates will also have to have received donations by December 12 from at least 200,000 unique donors, with a minimum of 800 from at least 20 different states.

Hawaii Rep. Tulsi Gabbard has cleared 4% in two polls of the necessary four polls, and businessmen Tom Steyer and Andrew Yang have each reached it in one poll.