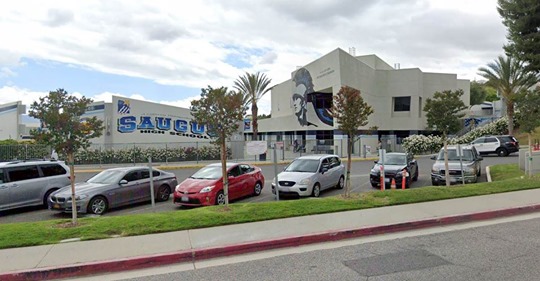 While investigators continued working to figure out why a 16-year-old boy shot five of classmates at Saugus High School, killing two of them, before turning the gun on himself, schools in the Santa Clarita area remained closed Friday in a day of mourning.

Meanwhile, doctors at Providence Holy Cross Medical Center in Mission Hills said two teenage girls wounded in the shooting were recovering and could leave the hospital soon. The gunman — who carried out the 16-second shooting rampage on his 16th birthday — remained hospitalized in what Sheriff Alex Villanueva called grave condition.

All schools in the William S. Hart Union High School District were closed Friday “out of respect for the victims and their families,” Deputy Superintendent Mike Kuhlman said.

“… District counselors and support provided by neighboring districts will be available to students and staff … from 8 a.m. to 4 p.m. at Grace Baptist Church located at 22833 Copper Hill Drive,” he said.

District officials initially said campuses would reopen Monday, although it was unclear if that will include Saugus High School.

The shooting, which occurred about 7:40 a.m. Thursday at the school at 21900 Centurian Way, sent students scrambling for cover — some fleeing from the campus and others barricading themselves inside classrooms or offices.

Sheriff’s deputies responding to the school found six people in the campus quad suffering from gunshot wounds. One of them was later determined to be the suspect, who shot himself in the head after firing at five classmates with a .45-caliber pistol he brought onto campus in his backpack, sheriff’s officials said.

Of the five victims who were shot, two — one boy and one girl — died at Henry Mayo Hospital in Valencia. The girl was identified by the coroner’s office as 15-year-old Gracie Anne Muehlberger.

Hundreds of condolence messages have been posted on Muehlberger’s Instagram page.

“I miss you so much already love,” one person wrote.

“It’s so sad that another innocent person has to die,” another said.

A person believed to be her brother wrote on Twitter, “My heart is killing me right now. You are the best sister I could’ve asked for. I just know you’re my guardian angel now. I love you Gracie.”

The 14-year-old boy who died had not been officially identified by authorities by midday Friday. One of his friends and youth football teammates, however, posted a team photo on Twitter and wrote, “Today a lil guy with a big heart lost his life in the Saugus shooting. He was always smiling making people laugh always positive. He was the sweetest kid ever and such a good kid. We need more people like you.”

Villanueva said the boy who died was a nephew of a sheriff’s department employee.

Another 14-year-old boy wounded in the shooting was treated and released from Henry Mayo Hospital Thursday.

Two other girls, aged 14 and 15, were also wounded and taken to Providence Holy Cross. Doctors there said Friday morning both were recovering and could be released from the hospital in one or two days.

Doctors said the 14-year-old was shot in a shoulder and abdomen and was in stable condition and “doing well.” The 15-year-old girl had a single bullet wound that entered below her belly button and lodged in her left hip. Doctors performed surgery and were able to remove the bullet, officials said.

“A remarkable experience, being with 14-, 15-year-old survivors, that are consoling you, not the other way around,” Newsom told Fox11. “They had this remarkable resilience, smiles on their face, one just coming out of surgery, the other one with two gunshot wounds and just remarkably blessed that they are alive, their families with them.”

Newsom called the spirit of the wounded students “amazing.”

There was still no word on what motivated the gunman, who has been identified by neighbors as Nathaniel Berhow, who turned 16 on Thursday.

Sheriff’s Capt. Kent Wegener said the shooting was captured on surveillance video, which shows the gunman reaching into his backpack, pulling out the gun and opening fire. The weapon, which had no bullets remaining, was recovered at the scene.

“We have not yet established a motive or a nexus between the subject and his victims” other than they were all students at the school, Wegener said Thursday.

Wegener said the shooting appeared to be completely random, with the gunman firing at anyone in his vicinity. Paul Delacourt, assistant director in charge of the FBI’s Los Angeles field office, said there was no early indication the suspect “was acting on behalf of any group or ideology.”

Officials also said there is no history of the teen being bullied.

As of Friday morning, the teen remained in critical condition at Henry Mayo Hospital — although hospital and sheriff’s officials have declined to confirm where the suspect was being treated. Hospital official confirmed Thursday, however, that four gunshot patients were treated at the hospital, with two of them dying and a third being treated and released — leaving only the suspect as the remaining gunshot patient.

A community vigil is being planned at 7 p.m. Sunday at Santa Clarita’s Central Park.

Sheriff’s deputies swarmed the Saugus High School campus in response to Thursday’s shooting, and fanned out through the neighborhood, initially uncertain whether a shooter was still at large.

Villanueva noted that three off-duty law enforcement officers — one with the sheriff’s department and officers from Inglewood and Los Angeles — were the first people on scene because they have relatives who attend the school.

After learning the suspect’s name by interviewing eyewitnesses and reviewing surveillance video, deputies went to his family’s home in the 22900 block of Sycamore Creek Drive and conducted an initial search to ensure there were no additional victims there, but none were found. Villanueva later said the teen’s mother and girlfriend were being interviewed by detectives.

A cross-country teammate of the suspect said he was shocked the teen could be capable of such a violent act.

“He was such the nicest person. … I don’t know why he would ever do this, especially on his birthday,” the teammate told Fox11.

Neighbors told reporters the family was mostly quiet, noting that the teen’s father had died two years ago, possibly from a heart attack. One neighbor said the father had struggled with substance abuse for years but was in recovery and building a relationship with his son.

Wegener initially said an Instagram account attributed to the suspect included a post Wednesday night saying, “Saugus have fun at school tomorrow.” Instagram said the account did not actually belong to the shooter and has since been disabled “for violating our policies.”

One female student told reporters after the shooting she heard the first gunshot and thought it was a balloon popping.

“The second and the third one is when everyone knew … it was gunfire,” she said, adding that students began scrambling for cover.

“I felt like I was running for my life,” she said. “… At that moment I just prayed and prayed that everyone was OK and safe.”

The girl said students had not heard of potential threats targeting the campus.

“We never heard of any threats or any problems,” she said. “This just suddenly happened. Yesterday was a normal day, and now we’re here getting evacuated from our school.”